This article is about the military conflict. For other uses, see Guild Wars (disambiguation). 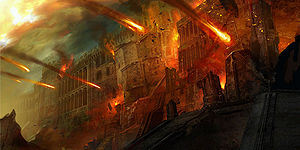 The Guild Wars were a series of military conflicts between the human kingdoms of the northern continent that finally ended in 1070 AE. When considered separately, they are known as the First, Second, and Third Guild Wars.

The 100 years following the Exodus of the Gods were a time of peace and prosperity, especially for the various human nations. Three powerful countries emerged: Kryta, Ascalon, and Orr. Each of these nations was home to its own dynasties, politics, and cultures, but no single country was seen as dominant.

Instead, this was a time of invention and trade. Connections and opportunities led to the creation of guilds. At first, these were economic organizations, a means for merchants to meet, disseminate goods, and set prices. However, the guilds grew beyond the bounds of mere trade. Soon there were guilds geared toward warfare, religion, magical ability, and even social concerns—in short, any purpose that would bring together a group of people.[1]

Because the guilds fostered communication as well as economic prosperity, they transcended borders. For instance, a guild that held sway in Kryta might also have chapters in Orr and Ascalon. They also began to dominate the political arena. A king or council might make a law, but it was the military guilds that were responsible for enforcing the proclamation. In essence, guilds began to hold the real power of human society.

Change came in the form of an enormous natural disaster. The volcano off the Krytan coast, which had been used to contain the Bloodstones, erupted. The stones were scattered throughout the land, and the magic they contained seeped into whatever they touched.

Once humanity realized what had occurred, and the potential inherent in the Bloodstones, they attempted to possess them. However, because so much power was held by the guilds, they used their influence over the human nations to vie for control. It became an enormous game of power, prestige, and guile, with countless guilds each struggling to claim the Bloodstones.

This period of strife and warfare was called the Guild Wars.

The Guild Wars raged for decades across the three nations. It was not comprised of any single campaign; instead, it encompassed a long-term struggle between a number of distinct factions. Over time, with no clear victor, the quest for dominance embroiled all the human nations. Ascalon, Orr, and Kryta declared war on each other, which caused constant fighting, manipulation, and the deaths of many.

The Third Guild War came to an abrupt and brutal end by the emergence of an even greater threat. The Charr invaded the human kingdoms, and they brought with them such brutality and ferocity that all the other conflicts paled in comparison. The Charr military was a force the human lands were not prepared for; they were used to human tactics and human sentiments. The Charr were another force entirely. They looked at the human countries, weakened by war and infighting, and saw lands ripe for conquering and subjugation.