Annihilator is an April Fools' Day quest asking you to save Sarah in the past from a time-traveling golem.

You will be under the disguise Going Commando and separated from your party for the duration of this quest.

Follow the quest marker through to Lakeside County. You can choose to fight or evade any of the groups you find, as they will mainly be fighting each other. If you choose to fight, focus on using AoE damage to take out multiple enemies. One effective strategy is to stand in the middle of a group, use Riot Shield, and then use Land Mine, which will deal upwards of 300 damage to enemies nearby and usually won't be interrupted as you're immune to attacks. If Corporal Bane is killed, he will automatically revive the next time he would say a battle quote.

When you find the Annihilator Golem, it will be standing next to Sarah. Use a Stun Grenade as soon as you are in range to allow her the time to escape, then destroy the golem. It is difficult to kill, but it will usually focus on attacking Corporal Bane or the Ascalonian Warrior in the area. The skill Damage Assessment will shadow step it and remove all conditions, so focus on using your skills after it shadow steps to ensure the most effective use. You can try to push the Golem towards the barn by the lake to prevent it from shadow stepping as much as possible as the wall seems to prevent it at the right angle. Try to stay in the area where you found it with Sarah, as there are corpses nearby to fuel the skill "Tango Down!", which is the only healing skill you have available. If possible, try to let the Ascalonian Guard that helps you die next to a corpse so that your "Tango Down!" lasts longer. Also, if Corporal Bane is low on health, lead him to these corpse so that when he dies, he can be used to increase "Tango Down!"'s duration. If done properly, you can keep up "Tango Down!" indefinitely until Corporal Bane revives. Set Land Mines as often as possible and lure the golem through them. (If you move far enough away from Corporal Bane, approximately beyond earshot, he will follow you, so if the golem is targeting him, move away in the direction of your mine.) The golem is not resistant to knockdown, but only Stun Grenades and Bludgeon will inflict a condition for Club Strike to knock it down. It is possible to build up enough adrenaline for Bludgeon then use Land Mine for knockdown, then follow up with Bludgeon for Deep Wound. This will allow you to use Club Strike as a knockdown and interrupt. When the golem nears death, he will use "I'll Be Back!". When he does, back off for about 15 seconds and use this time to heal with "Tango Down!". If you try to kill him while "I'll Be Back!" is in effect, he will recover 500 health resulting in you having to do more work to bring him down.

If you are having trouble fighting the golem head on, try using a house or the ridge as a shield when low on health. Most of the golem's offensive skills require line of sight, so he will not be able to hit you with most of his attacks. There is a corpse near this house, so you can "Tango Down!" while hiding to recover health. You can run around the house planting Land Mines to knock him down and use grenades for addition damage. If Corporal Bane is alive, you can use the house to redirect some of its attacks by throwing grenades until he starts casting Plasma Shot and running behind it before it finishes, giving Corporal Bane some free hits.

Alternatively, you can take advantage of Corporal Bane's self-resurrection by using him to hold the Annihilator Golem's attention while the player attacks from afar or plants Land Mines next to it. As long as the player retreats out of the Golem's range when Bane is near death this provides a safe, if tedious, way to complete the quest.

When the Annihilator Golem is defeated, you will be returned to Embark Beach.

Corporal Bane
"What year is it? Never mind, there is no time. I'm clearly off course. The rest of my squad was lost when the Asuran time-gate malfunctioned. Only their gear made it through. You look like...something of a soldier yourself. You must come with me now; there is no time to explain. The very future depends on it!"

Accept: "You had me at Asuran time-gate!"

Corporal Bane
Let me know when you are ready to travel!

After arrival in Regent Valley: 1059 AE:

Ascalonian Warrior: "What sort of Krytan trickery is this?"
Krytan Elementalist: "You will not fool us that easily, Ascalonian! We know these strangely dressed soldiers serve you!"
Ascalonian Warrior: "Your false words will not cause my blade to hesitate. Kill them all, men!"
Corporal Bane: "We seem to have arrived during a battle of the Guild Wars. We cannot allow this to distract us from our mission. We must make our way to Ashford."

If you die or resign in the instance:

The future refused to change...

After passing the first group:

Corporal Bane: "Our ammunition didn't make it through the rift. We're going to have to rely on our riot gear and grenades."

After passing the second group:

<Character name>: "So you're saying you are from the future, and now we are in the past? What exactly are we doing here?"
Corporal Bane: "We are here to prevent the Charr from reshaping history. There is a great hero that is yet to be born. The Charr refer to her as "The Goremonger", but you likely know her as Gwen."
Corporal Bane: "They have sent a powerful Annihilator Golem to kill her mother, Sarah. They hope to prevent Gwen's legacy from ever coming to pass."
Corporal Bane: "I was sent back to prevent the Annihilator from completing it's[sic] mission. There were...complications along the way, and I had to improvise. That's where you come in."

Near portal to Lakeside County:

<Character name>: "Wait, if we're back in time, before The Searing, couldn't we just prevent it from happening?"
Corporal Bane: "Searing Day is inevitable."

<Character name>: "What's stopping the Charr from just sending back another, more advanced golem if we beat this one?"
Corporal Bane: "What? That's dumb. If they had a more advanced one, why wouldn't they just send that golem back to begin with? Or better yet, both at the same time?"
<Character name>: "Yeah, I guess. But hey, won't all these people we're killing affect the time line too?"
Corporal Bane: "Don't think too hard about time travel; it will melt your brain."

Farmer Hamnet: "What is that metallic beast?"
Corporal Bane: "Where did you see it? We are here to destroy it!"
Ascalonian Warrior: "It's heading towards Ashford. I don't know who or what you are, but if you are truly here to destroy that monstrosity, follow me!"
Annihilator Golem: "SARAH?"
Sarah: "Yes?"
Corporal Bane: "There it is, and it has Sarah cornered! Hurry, use your Stun Grenade!"

After damaging the golem with a Stun Grenade:

Sarah: "How can I ever thank you?"
Corporal Bane: "You can survive. Now, get out of here! We'll finish this."

<Character name>: "You're annihilated!"
Corporal Bane: "The golem's destruction has opened another time rift. Hurry, it's our only way home!"
The future is what you make!

Corporal Bane
"We've done it. The future is now safe, and I can return to my time. Thank you, <Character name>. You make a fine Commando!" 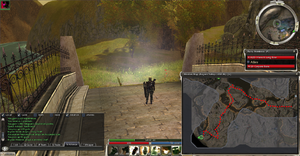 Bug.The Quest Log says the quest is given in Lion's Arch, instead of Embark Beach.

Anomaly.If you die and Corporal Bane kills the Annihilator Golem before you are automatically returned to Embark Beach, the quest is completed and the reward can be collected.

Anomaly.If the Annihilator Golem drops an item and you do not pick it up before you are automatically returned to Embark Beach, the Unclaimed Items will not appear.