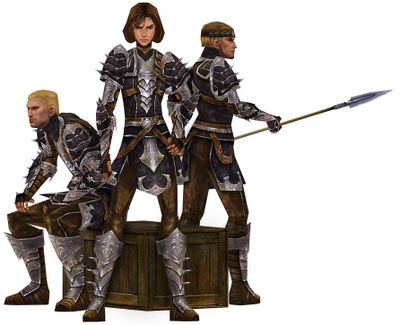 The Ebon Vanguard—originally made up of an official unit, the Ascalon Vanguard—operates behind Charr lines. As the unit pressed north, it picked up human refugees, exiles, and escaped prisoners from the Charr work camps. Together they forged a new organization, toughened by their experiences and more flexible than a traditional military unit. They endured much hardship on the march through the harsh northern climes, but upon finding the Eye of the North, the Ebon Vanguard established a base of operations for their covert campaign of disruption.

Currently, they are held up within the Eye of the North in the Far Shiverpeaks where they perform guerrilla attacks on the Charr and are occasionally assaulted by native Centaurs and Norn.