Anton has come far since his days as a prisoner in Surmia awaiting execution. While others curse the Charr, Anton privately blesses their invasion—without it, he would never have escaped Surmia and fled north. He survived for many years by raiding the Charr, eventually leading to his capture. Freed by Captain Langmar, he joined the Ebon Vanguard and now serves them as a scout, utilizing his Assassin skills—for once—for the betterment of more people than just himself.

Although he does not consider himself a brave individual, Anton does feel a certain amount of loyalty to the Ebon Vanguard, and has no plans to betray them. Should Captain Langmar die, of course, that situation could change quickly—and the last they will see of Anton is a sheathed blade vanishing into the darkness.

Anton is an Ascalonian who once lived in a village near Surmia. When the Charr first began their invasion, Anton stroke a deal with one of their leaders, Rend Ragemauler, exchanging information for the safety of his friends and family. He was discovered by his fellow countrymen, however, and taken prisoner. He awaited execution at Surmia when the Searing and the Charr invasion occurred. As a blessing in disguise, this cataclysmic event allowed Anton to escape his prison. However, upon returning home he discovered that his village and his family had been massacred by the Charr.

Between then and 1077 AE, Anton hunted down the Charr in hopes of revenge, and had begun seeking out Rend Ragemauler without luck. He was eventually captured by the Charr, and was rescued by Captain Langmar and was recruited into the Ebon Vanguard. Though he told them that he was a prisoner in Surmia when the Charr invaded, he never told the Vanguard - even Langmar - the circumstances for his imprisonment. He was present at Captain Langmar's expedition which Gwen had stumbled upon in the southern Charr Homelands.

In 1078 AE, Anton had finally heard of Rend Ragemauler's whereabouts during a mission to rescue Scout Winslow. Obsessed with revenge once more, he searched until he learned of Rend's destination, and confronted the Charr. When Rend was outmatched, he pleaded for mercy and offered a deal. Knowing how Rend treats his deals, the Assassin refused and ended Rend Ragemauler's life. Having abandoned his post in service of revenge, Anton felt he could no longer return to the Ebon Vanguard. Captain Langmar had similar feelings, and placed him under the Hero of Ascalon's care.

After freeing the Vanguard, help Anton with a series of quests given by Captain Langmar. After the final quest, The Assassin's Revenge, he will join your party. 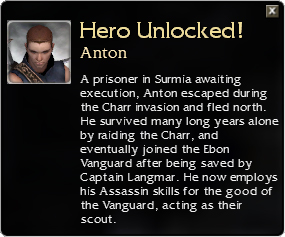 Anton starts with basic assassin armor, labeled as Ebon Vanguard armor but with its own unique appearance. Like most heroes, his headgear is hidden.

"What do you want? Are you staring at me? You want some of this? Do you?"

Epilogue
(If you do not have Anton as a Hero)

"The Ebon Vanguard look forward to working with you. There are still matters with the Charr to be settled."

(If you have Anton as a Hero)

"Who would have thought that on that day in Surmia when I awaited my execution I would end up here. Perhaps I can still make amends for all my misdeeds."

"After I escaped Surmia, I felt empty inside. I filled that void with a steady diet of death."
"I am an artist, and death is my medium. It is nice to use my skills in service of a larger cause."
"I have dwelt in the dark recesses. I have dealt pain and death to ease my own suffering. I regret nothing but the loss of my wife's smile."
"Life is like a box of knives. They gleam and glitter when new, full of promise and potential; at the end of the day, they're always covered in blood."
"Vengeance was all I had left of my old life. Now that is gone... which feels liberating, oddly enough. Perhaps it is time for a new life."

"Beware the shadows. I lurk there."
"Death will never see me coming!"
"Don't look around. I'm right behind you."
"From the shadows, I send you into the light."
"Grenth will take you in his chill embrace."
"I like the quiet. Please stop screaming."
"If you knew me better, you would be frightened. Boo!"
"Most days I live a life of quiet contemplation. Then there's today."
"My blades dance like a spider on hot iron!"
"Now you know how a scabbard feels!"
"They are like insects crushed beneath a heel."
"Vengeance has filled my life to the point of overflowing."
"Vengeance is a dish best served with cutlery."
"When you see my parents in the Mists, tell them I'm fine."
"Your death will stain the ground, but not my soul."