Struggling Artist
"Fame is fleeting, but a good meal will keep you going for days. You want that roll?"
Origin: Vabbi
Age: 24
Profession: Mesmer/Actor
Norgu is a classically trained actor, a visionary unappreciated in his own time, and a large, dramatic, boisterous glad-hander. As the leader of the Lyssan Fools acting troupe, he is currently on an extended tour of the estates of Vabbian nobles. Everywhere he travels, he leaves a memorable impression. Few will forget his insightfully accurate and delightfully humorous parody of General Bayel in Gandara, a performance that should keep him on an extended tour for quite some time. Norgu claims to have traveled throughout Tyria and Cantha, returning with stories of a standing-room-only performance in the court of Emperor Kisu and a standing ovation at the Henge of Denravi. Moving quickly from one region to the next, he uses his sunny disposition and personal charisma to get last-minute invites to parties, audiences with the rich and powerful, and of course, free food. Norgu never met a buffet he didn't like. As long as the supplies hold out, Norgu can be a loyal and clever ally–and he's egotistical enough to make sure you never, ever forget that.[1]

R indicates that Norgu must be in the party 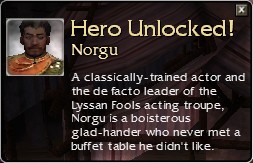 "I am Norgu of the Lyssan Fools, the most famous acting troupe in all of Vabbi! We perform a variety of styles: acting, poetry, singing, that sort of thing.

Have you seen the delightful buffet? The guards will have to pry me from the table with a war axe, or they'll have to get that lug Goren to do it for them. The man's the size of a beast!"

"Hail and well met, my poorly accessorized friends! Of course, I always have a moment for a fan. I'm sure you loved my work in Rurik, Prince of Tyria! No? Then you saw me portray Havelgaar, Terror of the Tides! What? Haven't you seen any of my plays? Ye gods, that's the saddest thing I've ever heard!"

"The streets of Vabbi will overflow with celebration, <player name>."

Quotes in the context of the Nightfall storyline

"Of the two, I vastly prefer acting. Life is scattered, unimaginative, and often abandons plot with no rhyme or reason. Acting always carries through the plot, and in the end, unlike in life, the heroes always win."

"The temple of the most beautiful goddess in creation is under assault, and I, her humble servant, must answer."

"Butoh the Bold? Yes, I've heard of him! The only man who can eat more at a buffet then [sic] I! Dwayna keep us safe, this must be serious."

"My only regret in the theatre is that I could never sit out front and watch...me."

"Ah, acting is happy agony, and more so when the audience is a captive one!"

"Centaurs! Ah, tragic. What a way to end a season."

"They always taught us at the theatre never to perform with children or animals... they'll always upstage you. But these wurms... well, I think I'll make an exception."

"You can clearly tell that Varesh isn't an actress. She's running scared, directly toward her goal. No subtlety! No panache! How tedious."

"There are legendary myths about the capture of Palawa Joko, but they were deemed too horrifying for the open stage."

"No rest for the weary in this wicked place. What a play this might have made!"

"The power of Lyssa isn't outside, it is within me, in every spell I cast. To think she can't hear me...well...I don't like the sound of that at all."

"Cowards die a thousand times, heroes die only once. But torturously, and often at the hand of their greatest enemy."

"What shall we find in the Gate of Madness, my friends? Hope. Let that be our guide."

""And, when he shall die, take him and cut him out in little stars and he will make the face of the Mists so fine that all the world will be in love with night." One of my favorites, you know."

"Boldly they rode into the jaws of death, and boldly emerged beyond it! I cannot wait to see the celebration they will give for us in Vabbi when we return."

"Acting teaches this: if you are not who you dream to be, become him."
"I played the Great Emperor in the Bokka Amphitheatre! I brought down the house at the Henge of Denravi. Don't you know how terribly important I am? The show can't go on without me!"
"I do occasionally sign autographs. Not often, you know, but I consider you a friend."
"Your voice is terrible, your movements stiff, and your motivation is shoddy at best. We'll have to work on that."
"I could arrange a bit part for you, if you want. Something walk-on, but with style..."

"Come on, kid! This is the finale!"
"Epic battle! Heroic climax! And... applause! Where's the applause?"
"Even Lyssa could not do better!"
"Fight the good fight!"
"Have at thee!"
"Honor! Valor! Death...! Hey, I don't like that last one."
"I was trained in the finest schools of magic!"
"I will tear apart your mind!"
"It's showtime!"
"The monster is illusion... your fear, truth!"
"This is just like act three, scene four!"
"Um... Is that real blood?"
"You have no chance of victory. Surrender!"
"Your imagination is your enemy!"
"Action!"