Meet M.O.X. the golem, the brainchild of a maverick Asuran inventor named Zinn. As an Asura with an entrepreneurial spirit, Zinn manufactured many golems for all sorts of clients, with little regard for their intended use—until one day when three of his golem creations turned on him. While being forced to augment these sinister creations against his will, Zinn also managed to develop his assistant M.O.X. to aid in his escape from their underground prison. M.O.X. now wanders the land in search of heroes that can help put an end to the three renegade creations and free his creator Zinn.

M.O.X. the Golem hero is available within the Guild Wars universe, an Asuran construct, quoted as "...the ultimate in magic, mechanized party protection." 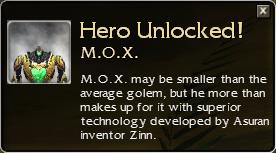 M.O.X. can be recruited by any Level 10 character on an account that includes each of the three major campaigns (Prophecies, Factions, and Nightfall). Characters must also have a free inventory slot (for receiving their customized copy of the Golem User Manual).

To recruit M.O.X., speak to it outside of any port:

M.O.X. uses armor with the same statistics as basic dervish armor. M.O.X.'s "armor" consists of a Golem Head, Golem Body, Golem Arms, Golem Legs and Golem Stompers. Unlike other heroes, M.O.X. has no alternate armor sets; it can be added to the Hall of Monuments immediately after recruitment.

M.O.X. will change its appearance when using any of the Dervish forms:

Before acquiring M.O.X. as a hero, and if your character is level 10 or above:

Before acquiring M.O.X. as a hero, and if your character is below level 10:

Trial of Zinn, before the trial: 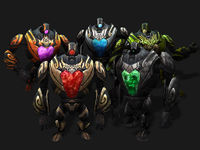 Anomaly. M.O.X. appears outside of ports whenever one or more party members is eligible to recruit it. This provides an undocumented method for getting a second copy of the manual.

Bug. When taken to the Training Arena, M.O.X.'s appearance is bugged and shows the wireframes for parts of his skin 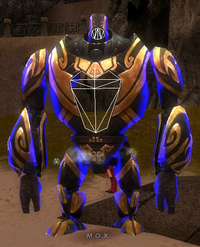 M.O.X.'s appearance in the Training Arena

Much of M.O.X.'s quotes are references to popular science fiction.