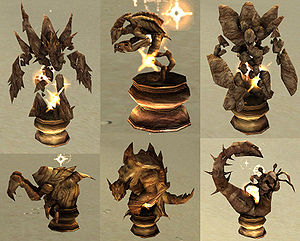 A collection of polymock pieces.

Polymock is a minigame in Guild Wars Eye of the North to earn reputation with the Asura. You play against the AI with three "pieces" that you select, each with a unique skill bar; the aim is to defeat your opponent by countering the "pieces" that it picks.

There are 27 different Polymock pieces (see list below), of which 18 are obtainable for players. Each time you pick one piece, you take the form of the corresponding creature. Polymock pieces resemble chess pieces when viewed in your inventory and appear to have a unique shape that is dependent upon the creature the piece is based upon. Each piece has its own set of skills, as shown by the table below. Polymock pieces must be registered before they can be used. See Denn in Rata Sum to register a piece.

Before you can participate in Polymock matches, you must first obtain three starter pieces from Hoff in Rata Sum and then register them with Denn. Each registration removes the Polymock piece from your inventory and is permanently tied to your character (as opposed to your account). Do not register the piece if you plan on trading it to another character.

Once you have the three starter pieces, you can do the quest chain which starts from Polymock: Defeat Yulma. The objective of a Polymock match is to kill all three of your opponent's pieces before they kill yours.

After defeating the designated opponent (i.e. completed the quest and accepted the reward), you can return to those you have defeated and challenge them to a match under tournament rules. The one difference is that you are required to choose your Polymock pieces from all three rarities (white, purple, gold). If you did not register at least one Polymock piece for each rarity, you cannot challenge opponents using tournament rules. Winning such Polymock matches will earn you from 40 to 90 Asuran reputation points, depending on who you challenged.

Polymock takes place in several special explorable areas, depending on which region the opponent is found in:

After completing all polymock quests, you must play by tournament rules. The game is played with 3 pieces of different rarities polymock. To play, you must have 1 common piece, 1 uncommon piece and 1 rare piece.

For maxing the Asuran title

Talk to Wokk to choose the three Polymock pieces that you want to use. After selecting your three pieces, you are then asked to select which of the three to start with. You are allowed to examine your skill bar before each round begins. Note that the platforms your piece and your opponent's piece are standing on are close to each other and that it is impossible to move out of range (although strafing to dodge projectiles is possible). Your character is replaced by the Polymock piece that you have chosen. Any enchantments or summons you have are removed. Your weapon and armor bonuses do not apply to Polymock skills.

Skill use and effects during the match are similar to normal PvE, the only difference being conditions like Burning, Bleeding, and Disease always cause full -10 health degeneration.

When you are done reviewing your skills, you can tell Wokk to start the match. A 10-second countdown timer will begin, counting down to the start of the duel, at which point the opponent's Polymock piece turns hostile.

A round ends when one or both Polymock pieces loses all health. The loser is required to select another Polymock piece from the remaining two to start the next round. The winner retains its current level of health and energy, and all skills continue their recharge duration (i.e. the skills are not automatically recharged). Once the loser selects the next piece and starts the next round, the 10-second countdown will start again. If your opponent (i.e. the NPC) lost the previous round, the countdown timer starts almost immediately, since the winner is not prompted to start the next round.

This continues until one side's three Polymock pieces have all been defeated. Win or lose, you will be returned to the previous location.

All Polymock pieces share the last 5 skills on their bars.

A good opening piece when you still need to use common pieces is the Skale because it does 150 damage with its spammable attack to enemies > 50% health and has two damage skills, both of which do a great deal of damage but take time to activate and thus benefit from facing a healthy opponent.

When the opponent begins a round with a new piece, they will always start off with Polymock Glyph of Concentration, followed by either their most damaging spell or sometimes the light damage spell. This can be taken advantage of by using your 2-second spells right from the start. Even if your opponent attempts Polymock Power Drain after the glyph, you will almost always get your spell off. Using the 2-second spell here risks taking their high damage spell without being able to get Polymock Block off in time, so using your 1-second spell then Blocking instead may be preferred. Be careful to wait at least 30 seconds for your opponent's skills to recharge before beginning with your new piece so they will have the Polymock Glyph of Concentration available, otherwise they'll start the round in an unpredictable manner.

Always watch your health and energy levels. When you're below 50% health, do not neglect the bonus damage offered by Polymock Glyph of Power. But do not activate it blindly, as the enemy will Polymock Power Drain your attempts to use the Glyph. Be aware of whether you have enough energy to pull it off, because the Glyph works very well with your spammable skill.

Do not forget to use Polymock Ether Signet the moment you reach zero energy. Trying to cast spells without energy wastes valuable time. If you or your opponent is weak, don't hesitate to waste a Polymock Power Drain or Polymock Block to use up your energy so that you can use the Ether Signet and hit them with a higher damage ability.

Try to use Polymock Power Drain and Polymock Block wisely. Try to save them for highly damaging spells and time their recharge. Polymock Glyph of Power is a good interrupt target as well. Be aware of what type of spells can be blocked and what type can be interrupted but not blocked.

Polymock Block can be used as an alternative to Polymock Glyph of Concentration if you use a 1 second spell right after it. Frequently the enemy won't react right away after having a spell blocked, giving plenty of time for your spell to complete. They will often be able to interrupt a 2 second spell after being blocked though, but if you can use the block while they're not casting then it will work for longer spells as well. If you have neither available, you can also slip a 1 second spell in right as the enemy is activating one of their spammable attacks to get it through uninterrupted.

The following opponents are listed in the order the quest chain introduces them: