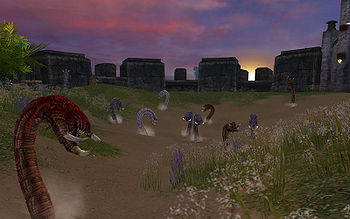 Dragon Nest is a festival minigame that is only available when the Shing Jea Boardwalk is open. A game of Dragon Nest resembles the game Whac-A-Mole, and can include anywhere between one to eight players.

The minigame costs 1 Festival Ticket payable to Ki Leung, outside the arena.

The goal of the game is to tag the gray and white hatchlings to gain points, while avoiding the red hatchlings. There are four rounds which last 45 seconds each and a 15 second break between each round. The game can include up to eight participants.

There are three different types of hatchlings: