The protomatter that makes up the Mists strains toward creation, often spawning demonic creations in nightmarish forms. Not all creatures from the Mists are demonic, however. When the Mists come into contact with a suitable human template, for example, it can copy that form, creating a sentient entity with humanoid appearance and an almost human mind.

Razah is one such creation. It has sprung into being a fully-formed adult. It has the knowledge and capabilities of a human, but lacks common sense. As a result, it asks odd questions about human emotions, contemplates human motivations, and attempts to duplicate human mannerisms. Razah is a contradiction: more than human in some ways, and less than human in others. It needs an identity, a personality, and a purpose. Hopefully, it will find its purpose by working with a hero. Otherwise, it could degenerate into an abomination as monstrous and inhuman as its demonic brethren. 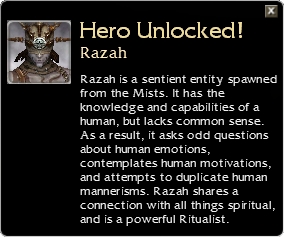 Complete the quest Finding a Purpose, offered by Chaplain Phyratyss in the Gate of Anguish. Your character must have completed the Nightfall campaign.

To change Razah's primary profession, make sure that it is not in the party and then revisit it in the Heart of Abaddon (just outside the portal), the Isle of the Nameless, or the Command Post.

After completing Finding a Purpose, while Razah is not in your party
"I have seen many wondrous sights in my travels with you, yet there are countless paths left to walk. What other knowledge might I gain by looking at things from a new perspective? Maybe it is time for me to answer a different calling. What say you?"

"I must cast aside the equipment of my old path before I can walk a new one. Is this acceptable?

Yes, everything is prepared.

[sic] No, let's set aside the valuables first.

In Heart of Abaddon after Finding a Purpose
"I spent days staring into the eyes on these walls, wondering why they were watching at [sic] me, what they were thinking, who they belonged to. Are there souls behind those waxy stares, or are they simply the facade of the tormented and soulless dead? I do not have the answer."
"These plants are fascinating, are they not? They grow throughout the realm wherever there is enough blood for them to feed. Do not touch them; one prick will lead to a painful and certain death."
"Although I was bound here, I have no resentment towards this place. The soft, pulsing light that permeates the land reminds me of the Mists."

"Destruction seems a natural part of the human condition."
"Human rituals seem to involve a great deal of talking, and dancing, and making speeches. This much I have seen... but I do not understand."
"I have learned this much: in all of human existence, there are many kinds of life... and many kinds of death."
"If I learn to cry, it will not be for me. It will not be for Istan. It will be for the gods themselves, who cannot be a part of the very thing they created."
"It is possible to commit no errors and still lose. That is not a weakness. That is life."
"Tell me, are all humans as obsessed with yelling and bludgeoning things, or are you an unusual representative of your species?"

"Ah! I begin to understand pain! Thank you!"
"I barely touched him... and he broke. You humans are so fragile!"
"I cannot understand why you shout such things."
"Now you will know the emptiness of death."
"Retreat or die."
"Such unlimited potential! Such limited imagination."
"These people are my friends. I will not allow you to hurt them."
"This conflict does not educate me. Cease and desist."
"We rise and fall together."
"What a waste, to understand life, and yet throw it away for such a trite cause."
"What is this 'pain' you feel?"
"May the Mists be with you."
"You are not ready for immortality."