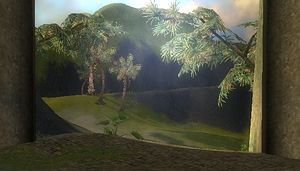 A portal from Prophecies, also seen in Factions. 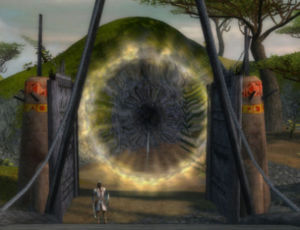 A portal from Nightfall, also seen in Eye of the North.

A portal is a specific place along the perimeter of a town, outpost or explorable area that allows access to an adjacent area. Arenas generally do not have portals. Classic Prophecies and Factions portals have a distinct shimmer and blue haze. Nightfall and Eye of the North (GW:EN) portals look like a pool of water with a yellow outline. Both are round in appearance, and often have a glowing or faint lighting effects around the edges. Often you can see the area just on the other side of portal through the rippling effect indicating that once you run through and zone to that area, you will be just a few feet away on the other side of the same portal. Some portals will teleport you a short distance away, or to a second portal at the other end of a long path.

Some portals are initially closed off or gated until unlocked by completing a quest or mission. Portals are always indicated on the main map, the mission map and the compass (with the exception of the dock areas near Kamadan) by a small whirlpool graphic called a zone marker (

Passing through a portal into another area is often called zoning.

Portals on a mission map.
Retrieved from "https://wiki.guildwars.com/index.php?title=Portal&oldid=2667590"
Category: