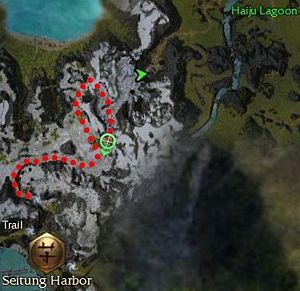 The World Map while trekking through an explorable area

The World Map, also known as the M map, is a full screen display which shows the map of the entire continent you are currently on. The world map can be accessed by pressing a key (default: "M"), or clicking the menu button. It can be closed by pressing the same key again or with a small button in the lower right.

At the default local zoom, any previously visited staging area on the continent will be displayed as an icon on the map, and can be instantaneously "map-traveled" to by clicking or double-clicking the icon.

Local zoom will display the same red "breadcrumb" dots as are shown on the on-screen mission map while in missions and explorable areas. Your location is marked by a green crosshair.

Explorable areas that have been visited will be named on the map. The name of the explorable area containing the active quest will be shown in green, and will often be visible even it has not been visited, along with a marker showing the portal that will take you closer to that area. 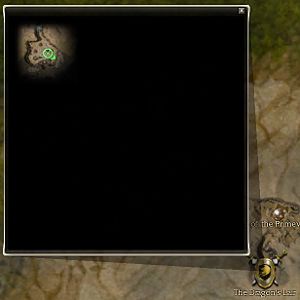 When the current area is underground, its map will be displayed in a hovering callout box. If this box is closed, it can be re-opened by pressing a button marked "mission map" in the lower left corner. Underground areas are never required for cartographer titles; some even reset their exploration every time you leave them.

Some areas, such as the guild hall and the portal-less battle areas that most PvP matches are fought in, do not appear on the world map at all; the map will just display the region that the area is located in. These areas do display — and are typically always shown as fully explored — on the mission map.

Map pins and travel icons when zoomed out

Dragging anywhere will pan the map, and clicking anywhere that is not an icon will zoom the map out to a continental view. While zoomed out, everything is hidden and unusable; towns, mission outposts, and arenas are shown as colored pins, and the current quest's area name is reduced to a green starburst. Town pins are gold, mission outpost pins are gray and arena outpost pins are red. Only ships, Asura gates and the Vortex remain completely visible and functional. Return to local zoom by clicking anywhere.