From Guild Wars Wiki
Jump to navigationJump to search
Spoiler alert: The following text contains spoilers relating to the story of Prophecies, Eye of the North, and Beyond.

Born in Ascalon, Gwen has witnessed horrible things in her young life, seeing both her country and family destroyed by the Charr. After the Searing, she was captured and enslaved by the Charr, but escaped and fled north, where she found other human exiles.

Since then, Gwen has become an adventurer. She makes her home in the Eye of the North, the headquarters of the Ebon Vanguard, where she serves Captain Langmar. She is one of the fiercest defenders of Ascalon, determined to exact vengeance against those who destroyed her home. Gwen has survived on the edges of Charr territory for years, watching them tear apart her childhood dreams and her beautiful homeland. Now she has nothing but memories—and anger—to sustain her. She is not the girl she once was...

Gwen (born 1060 AE) is an Ascalonian adventurer and the current commanding officer of the Ebon Vanguard. Originally hailing from Ashford, she lived with her mother Sarah until the Searing, when her mother was killed and she was taken captive by the Charr. For seven years she suffered at their hands, during which time she developed a deep hatred of the feline race. Eventually, she escaped, fleeing north until she chanced upon an Ebon Vanguard camp, where Captain Langmar took her in.

Within a year she had risen to the position of second-in-command, and aided in the effort to rescue Langmar and her soldiers from the Charr Homelands when they were captured during a mission. In doing so, she helped topple Hierophant Burntsoul, which was the main stepping stone for Pyre Fierceshot's long road to revolution. Alongside Langmar and others, she followed the Vanguard to victory in the battle against the Great Destroyer. Other notable accomplishments at this stage of her life include helping to stop a possible Titan threat in the Charr Homelands and returning to Ascalon to deal with Dahgar, the Eye of Flame, one of her Charr tormentors during her long years in captivity.

By 1079 AE, she had become romantically involved with Lieutenant Keiran Thackeray. However, her cold personality made his advances difficult and eventually he gave up, deciding to travel to Kryta with his unit, the Ebon Falcons, in order to help defeat the White Mantle in return for aid against the Charr from the Krytan monarchy. During the Krytan civil war, Captain Langmar was killed and Keiran was reported as missing in action, leaving a distraught Gwen in command of the Ebon Vanguard. She organized a search for Keiran, eventually reuniting with him at Anvil Rock. After the two reunited, Keiran proposed, and the two were married in Olafstead.

In 1080 AE, King Adelbern recalls Gwen and the Ebon Vanguard to fortify Ebonhawke, a town alongside the Blazeridge Mountains, in order to solidify supply lines to Ascalon City. 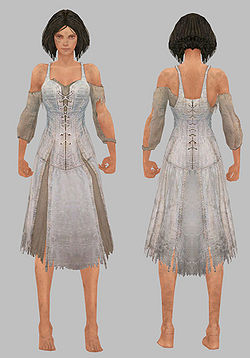 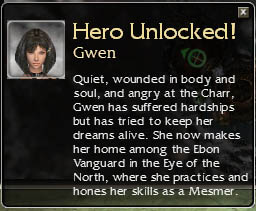 Gwen is recruited shortly after reaching the Eye of the North. After watching The First Vision via the Scrying Pool in the Hall of Monuments for the first time, Gwen will become unlocked. 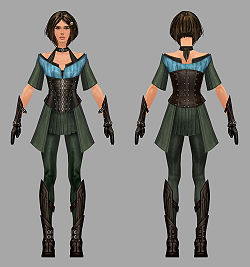 Gwen starts with Mesmer Ebon Vanguard armor. Like most heroes, her headgear (mask in her case) is hidden. Her armor has an armor rating of 60. 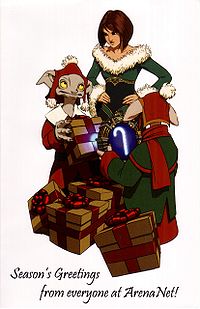 "All of us have suffered in our own way."
With both Red Iris Flower and Tapestry Shred, before completion of The Missing Vanguard
"I appreciate that you kept these relics of my past, but we must put them aside for now. The Ebon Vanguard needs us."
With either Red Iris Flower or Tapestry Shred, before completion of The Missing Vanguard
"I can't believe you held on that for so many years. But, with the Ebon Vanguard missing, my own past must be put aside for now. We'll have time for this matter after my friends are rescued."
With only Preserved Red Iris Flower, before completion of The Missing Vanguard
"So many feelings. So many memories. I... no. The Ebon Vanguard needs us. We'll talk again after that matter is settled."
During Wintersday, after completion of Wintersday Cheer
"I'm sorry I was angry. This pendant means so much to me. I can feel love in it. My mother's love, and.... Thank you! Thank you for everything, my friend."
Alternative dialogue after watching the first vision
"By the way, we found this monumental tapestry a while ago. I think it's meant for one of these walls, but I never got around to choosing which monument to hang it over. Since the scrying pool responded to you, I think it's only fitting that you decide. Here, take it."

Thank you. I know you've had greater concerns than these monuments.

⇒ What is this place?

"We call this the Hall of Monuments. When the Ebon Vanguard arrived here, we found these platforms and this scrying pool. Captain Langmar, Artificer Mullenix, and I have all tried, repeatedly, to make it function. It won't respond to any of us. It's like the pool is waiting for something... or someone."

⇒ What is this pool in the center of the room?

"The scrying pool! You made it respond to your will! When the Ebon Vanguard first arrived here, we found this pool and the surrounding platforms, but none of us could make it respond. It's as if it was waiting for you."

⇒ What is the Ebon Vanguard?

"The Ebon Vanguard was originally just a small cadre of soldiers sent north to raid the Charr and divert their troops from the southern invasions. Over time, exiles, refugees, and escaped prisoners of war swelled their ranks, and we've since became known as the Ebon Vanguard. But our mission remains the same: we must take the fight to the Charr and force them to leave Ascalon!"

⇒ Where is the Ebon Vanguard?

"The Eye of the North is our main base, but the Vanguard sends raids deep into the Charr homelands, through Longeye's Ledge in Norn territory to the east. Captain Langmar should have returned from her last mission by now, and I fear the worst."

⇒ How did you end up with the Ebon Vanguard?

"I don't really want to talk about that. I was a prisoner of the Charr, I escaped. Now I want vengeance." 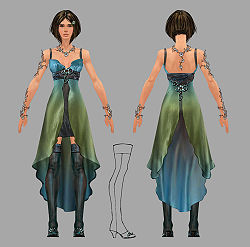 The Wedding
"This isn't exactly the wedding I had always pictured as a child, but this is still the happiest day I can remember. Thank you for everything you have done for me ... for us." 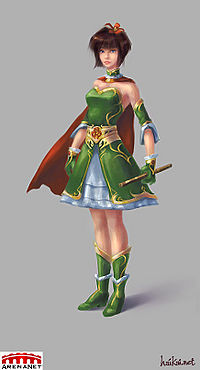 Ascalon (pre-Searing)
"Are we there yet?"
"Are you a hero, too, like Aidan and Devona? My daddy was a great warrior, but he died when I was seven. Mommy says maybe we'll see him again after we die. Do you think that's true?"
"Devona is so pretty! I love her hair. Do you think my hair will be that pretty when I grow up?"
"Eww! A big beetle!"
"Have you met my mommy? Her name is Sarah. She's the town herbalist. She helps make sick people well again."
"How am I ever going to get home?
"I hope this isn't too dangerous."
"I'm on an adventure!"
"Hail King Adelbern!"
"I think I'm going to follow you!"
"I want to be an adventurer too. Can I come with you?"
"I wish I had a red cape like Sandra's. It's my favorite color."
"I wonder how many flowers it takes to fill a vase?"
"I wonder if mommy would like these flowers."
"Lady Althea's father is a duke. That means he's important, and he knows Prince Rurik. I'd love to meet the prince someday."
"Mary Malone brought us apples today. They're so lovely and ripe! Mommy wouldn't let me have one. She's saving them to bake a pie. Yummy!"
"Mommy says I shouldn't bother the grownups so much, but there aren't any children for me to play with. Besides, they're all so nice to me! Well, most of them are, anyway."
"Mr. & Mrs. Hathorn have children, but they're too young to play with me. Sometimes Mrs. Hathorn lets me hold the baby. He's so cute!"
"My daddy was an adventurer like you. Once, he let me go on an adventure with him."
"Okay, I'll wait here."
"Old Mack has a bull named Bill, and he's really mean. Once I saw him chase a man and hurt him real bad. Someone ought to do something about him. If my daddy was here, he'd kill that old bull and carve him into steaks!"
"Prince Rurik and Lady Althea are going to get married! I can't wait! I hope I get to attend the wedding. I just love weddings!"
"*Sniff*..."
"Some day I will be a famous musician!"
"Someone help me!"
"That last flower had a bee on it!"
"The red flowers are my favorite."
"Those monsters almost ate me!"
"When I grow up I want to be an adventurer just like you."
"When I grow up, I'm going to be a hero like my daddy. I'd like to be a warrior, but the mesmers' outfits are nicer, don't you think?"
"Will we ever be there?"
"You look really strong. Can you teach me anything?"

In the presence of profession trainers

"Van is so big and strong! He reminds me of my daddy...strong and brave and handsome. Sigh. I miss my daddy."

"Don't you just love Artemis? She's so funny! She always makes me laugh, especially when I'm sad. And she knows how to make animals friendly! Isn't that wonderfull?"

"Mommy and Ciglo are both healers, but Mommy uses herbs to heal people, and Ciglo uses magic from Dwayna. He told me. He's very nice to children."

"Oooh, did you see Sebedoh's outfit? It's lovely, isn't it? I especially like her shoes. When I grow up, I want to be a mesmer so I can have shoes like those."

"Howland is so boring! He never has time for children. I wonder what he's thinking about all the time? He always looks so serious." 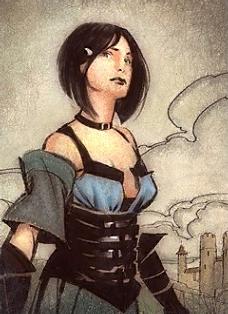 "All the iris flowers are dead. Soon, the Charr will follow."
"Devona taught me how to fight. The Charr taught me how to kill."
"I'm not a child anymore. It's time for you to follow me."
"It's so cold here. I should have brought my cloak..."
"Mother told me we see people again after we die. I miss her."
"The light that burns twice as bright burns half as long."

During Annihilator 2: Searing Day
"Does it hurt when you get hit?"'
"I hid my flute earlier, but I can't remember where I put it."
"Now, remember: you can't kill anyone. Except the bad golem, I guess."
"You have to listen to the way people talk. You don't say "affirmative," you say "okie dokie.""
"When I get married, I hope my husband isn't too wishy-washy."'

"...and I'm all out of mossgum!"
"Again? Can't we get some real challenges?"
"Anyone who runs gets it in the back! The only thing you save is your pretty smile."
"Destiny? Destiny's nothing but justice without the smell of burned flesh."
"For Ascalon and the wall!"
"Forgiveness? That's Lyssa's job. It's mine to arrange the meeting."
"I'll tell you what I told the Charr: fur burns, too!"
"I'm learning about pain and torment one Charr at a time."
"If it bleeds, we can kill it."
"Mother... forgive me."
"Nobody gets away from me! I'll follow you to the ends of the world if I have to!"
"The Ebon Vanguard will fight until Ascalon is free!"
"Victory to Dwayna! Victory to Ascalon!"
"You've got some really nice toys there. Mind if I break them?"

Concept art by Kristen Perry, claimed to be for Guild Wars Utopia