Kahmu is an Elonian Dervish, a native of Vabbi, who seeks wisdom through combat. Over the years, he has drifted farther and farther north, matching his skills against all manner of challenges, considering no fight too small—or too large.

Once Kahmu arrived in Norn territory, he challenged—and bested—some of the Norn's greatest warriors, and his name became legend around the campfires. Some claim he is a spirit, others that he has been blessed by the spirits of his homeland, and still others that he is a Norn born in the wrong body. Kahmu only laughs to hear these whispers. When the hunting here grows stale, he will simply move on. 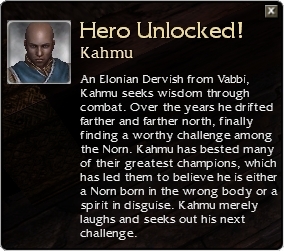 To unlock Kahmu as a hero, you must defeat him during the fourth round of The Norn Fighting Tournament. (However, he is one of seven possible opponents, so you might have to repeat the tournament before he appears.)

In the Norn Fighting Tournament

Kahmu starts with basic dervish armor, labeled as Vabbian armor but with its own unique appearance. Like most heroes, his headgear is hidden.

Epilogue
(If you do not have Kahmu as a hero)

"Stop by Gunnar's Hold and participate in Magni's Tournament. Surely I could learn a thing or two from a hero such as yourself."

(If you do have Kahmu as a hero)

"Truth doesn't come without effort. One must seek it out, risk for it, and steal it from the jaws of death. We can make our own truths... if we dare."

"Do not fret. As long as I am with you we will succeed."
"Lay off the reaper jokes. I've heard them all."
"Some find knowledge in books, while others journey to the ends of the earth. My inspiration is right here in my hands."
"Sometimes, when the air is just right, I can almost smell the markets of Vabbi."
"The goal is to *not* get hit."
"The Norn can fight. I'll give them that much."

"Cretins like you shouldn't be allowed out."
"For Vabbi!"
"I just sharpened my scythe. Did you notice?"
"I like you. I'll kill you last."
"I will learn from your mistakes."
"I've been practicing this move all week."
"I've killed siege wurms bigger than you."
"It slices, dices, and mashes tubers!"
"Oops. I took too much off the top."
"Protect your throat next time!"
"Tell Grenth that Kahmu sent you."
"The art of combat takes years to master. I've studied all my life."
"To know a man is to steal his dying breath."
"Today's lesson: off with your head."