This article is about a mission. This name is also used for an outpost and a Zaishen mission quest. For the explorable area, see Depths of Madness.

You and Kormir have traveled to the Gate of Madness, seeking the Temple of the Six Gods, and in it, a way to beseech the Gods for assistance in defeating Abaddon. Unfortunately, the way is heavily guarded by Torment creatures and Margonites, as well as some old enemies from Prophecies and Factions.

This mission is considered one of the hardest in the Nightfall campaign - due to large demon patrols, -15% healing effectiveness, chaos rifts that continually spawn foes, and battles with both the Undead Lich and Shiro Tagachi.

The mission can be divided into three parts plus the bonus:

Cross the ravine by using either of two routes. The shortest route is a bridge across the chasm occupied by Titans, and the other option is to walk around the chasm along the path occupied by the Margonites (including the boss Champion Puran) and the Torment creatures.

You will then arrive at a gate (point 1 on the map) where Shiro will summon four groups of Shiro'kens. You can avoid two late groups by running through the open gate immediately. Alternatively, retrace your steps to only engage single groups, or simply run back to the base of the hill, watch the Shiro'ken run atop and then sweep through the gate at the bottom of the hill used by the Shiro'ken.

After the Shiro'ken, the Undead Lich will open five Chaos Rifts, which will spawn a variety of enemies (Prophecies Titans, Margonites and Torment Claws) continuously as long as they remain open. These portals are guarded by three Portal Wraiths each, which must be defeated to close them. The Wraiths themselves are not servants of Abaddon and so the Lightbringer title and skills are ineffective.

Progressively destroy the rifts one by one, pulling roving enemies to the recently closed portals. Foes only respawn if their entire group is killed, so consider leaving one alive before defeating the wraiths of the portal (Titans other than the continually spawning group do not respawn). There is also an Armageddon Lord at the northern rift.

After all portals are closed, the Temple of the Six Gods's gate opens. This instance is often used to take a break. Margonite groups, Shiro and the Undead Lich are awaiting inside the temple.

If you are completing the mission with heroes and henchmen, now is the time to read and carry out the bonus objectives.

Defeating Shiro and the Undead Lich[edit]

Most groups encounter some difficulty defeating one or both of these foes. The most important step is to pull them apart and it is almost always easier to have Shiro chase you. Set up your party just outside of the temple gate; if you have them, you can use spirits and/or minions and/or tanks to block each boss from reaching your backline.

Initially, Shiro is not difficult; he starts by dishing out manageable amounts of damage and seems to lose health quickly enough. However, once he is reduced to 25% of his health, he will use Impossible Odds, which can do large amounts of damage, remove any hexes, and transfer conditions to any opponent he hits. There are several strategies that work well:

The two biggest threats from the lich are his high damage output and his ability to turn enchantments against the enchanted. You can counter him easily using party-wide heal, healing spirits, and/or non-enchantment protections (such as stances or non-typed skills).

To complete the bonus, you have to rally the five deity shrines in the temple before killing Shiro and the Lich (killing them would end the mission early, eliminating any chances at the bonus). You capture them the same way as you have seen in other missions (e.g. Grand Court of Sebelkeh): as each party member stands near the shrine, the ownership transfers to the party; the rate goes up with each new character present and goes down with each foe. You can capture the shrines in any order.

Each shrine is devoted to a particular god and is defended by 2-4 corresponding Margonites (e.g. Mesmers at Lyssa's shrine). For each shrine you have captured, the shrine will grant the party with all the blessings of that god (the generic blessings that can be applied to all professions, and also blessings for your primary profession). If you lose a shrine, you lose the blessings but will still get credit for the bonus; you do not have to retain control to obtain the Master's level reward. For each shrine that is captured the first time, your party gains a 2% Morale Boost. 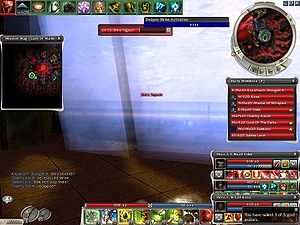 Shiro stuck in a shrine

The easiest way to get the bonus is to exploit a hole in the game mechanics, using heroes and henchmen to capture the shrines. You must do this after closing the rifts, but before entering the corridor to the shrine area. The guards of each shrine will not attack your heroes and henchmen unless you have entered compass range of the shrine (i.e. don't go too close to the portals near the temple when capturing them).

Open the mission map (U), and zoom in towards the shrines, which will be marked on the map. Flag all of your heroes and henchmen to a shrine, and then wait for the color of the icon to change from red to grey to blue. When the icon changes to blue, your party will receive the god bonus, and the objectives will update. Repeat this for the other four shrines on the map (not the Abaddon shrine). To keep them from losing their way, consider flagging your heroes back to the center of the temple after capturing each shrine. If you have trouble with flagging heroes, consider sacrificing yourself with vampiric weapons or skills, and then clicking on a hero/henchman's name to view from their perspective and then move the flag appropriately.

Another exploit is to take advantage of Shiro's AI: he has a preference to pick low health targets (e.g. spirits), so leave them at the back of either shrine and near the column. This structure prevents Shiro from returning to the center of the temple. Since there are a total of five rooms to cap, you have four chances to get him out of the way while you complete the bonus.

If you are in a group primarily composed of players (or if you do not wish to use the exploit), take on the bosses one at a time; which you choose is a matter of taste:

Whichever you target first, as you capture each shrine, kill its attending guards (so that they do not pester you during the boss battles and so you maintain the bonus from holding the shrines).

Kormir: "Report, my friend!"
Tormented Soul: "It is an old temple of the Six Gods."
<Party leader>: "Six gods - from a time before Abaddon's fall."
Kormir: "Indeed. Once this temple stood on the shores of the Crystal Sea."
Kormir: "But the Margonites so loved Abaddon, that they defaced the statues of the other gods."
Tormented Soul: "And when Abaddon fell, he pulled it down into Torment. It is now overrun by his Margonite worshipers."
Kormir: "You have done well, spirit! Join your fellows in the Mists."
Tormented Soul: "Thank you. May the gods stop Abaddon's madness!"
<Party leader>: "Kormir? Are you all right?"
Kormir: "No. We teeter on the edge of chaos, and it is my fault."
<Party leader>: "It is not your fault. Abaddon has worked for centuries to free himself."
Kormir: "Very well. My responsibility. Let us pray the gods will aid us."

Kormir: The Temple of the Six Gods lies just beyond this chasm.
Kormir: We must reach the temple and try to commune with the gods. This may be the key to defeating Abaddon.
Kormir: Tread carefully. A powerful evil surrounds and pervades this place.

When first approaching the temple.

Shiro Tagachi: You are fools to come here. What can mere mortals do against the power of a god?
Shiro Tagachi: No matter. Your journey ends here. My Shiro'ken shall welcome you to this holy place and entomb you within its walls.

When getting closer to the temple.

Undead Lich: You may well be impressed with yourselves to have made it this far. But, do not expect me to be as friendly as that Canthan bodyguard.
Undead Lich: Your presence is an affront to this temple's Margonite worshipers. You shall be greeted with open claws and shown no remorse in their house.
Undead Lich: In the unlikely event that you survive their wrath, I shall be waiting...

When entering the temple.

Undead Lich: Did the Margonites wear you out? No? Good. We hoped you might have some strength left for us.
Shiro Tagachi: You cannot stop Nightfall! Abaddon shall rule the world as the one and only, true god.

I shall enjoy cutting you down.

Is that all you have?

Taste my twin blades of torment!

I look forward to raising you from the dead... as my minion!

Kormir: "Gods, we beseech you. Hear our prayers."
<Party leader>: "We have come where living men should not be. We have fought armies, crossed wastelands and conquered demons."
<Party leader>: "Now we are in the heart of Torment. We must destroy Abaddon before he destroys the world. But we cannot battle him alone."
Lyssa's Muse: "You are not alone. The gods are always watching."
Kormir: "Watching? We need your help. We are only mortals, and we challenge a god."
Lyssa's Muse: "There was a time when the gods walked the earth. Every thought and achievement was a gift of the gods."
Lyssa's Muse: "But now you must realize that our gifts are within you. Dwayna lives in your compassion, Balthazar in your strength."
Lyssa's Muse: "Melandru dwells in your harmony, Grenth in your justice."
Lyssa's Muse: "And in your inspiration, Lyssa is there."
Lyssa's Muse: "The divinity is within you. And so, we give you our blessing. That should suffice for the task ahead."
Lyssa's Muse: "And to you, Kormir, a most special gift."
Lyssa's Muse: "This is your world, now. This is your decision. You must make the choice that only a mortal could make."
Kormir: "Our decision? They leave us some words of encouragement and expect us to fight a god?"
<Party leader>: "The gods said we have a choice. A choice that only a mortal could make."
Kormir: "Yes. Yes, there is a choice. We can end this. We don't have to be driven by gods and their avatars. Let us go."

Anomaly.When fighting Shiro Tagachi and the Undead Lich don't back too far away from the temple or your whole party will die.

Bug.Sometimes, despite having killed the Lich, Shiro and all Margonites in the shrine area, the mission will not end. This forces you to redo the entire mission, despite having completed all requirements. This can happen when sending heroes/henchmen ahead to capture the shrines and aggroing Shiro or the Lich before the dialogue begins. Breaking aggro and waiting for the dialogue may be enough to avoid this. The way to avoid this is to recall all of your heroes/henchmen back to you, outside of the Temple, then run in as a group. Running into the Temple while your heroes/henchmen are already inside will result in the dialogue not triggering, which may result in the bug.

Bug.Sometimes, the gates will not open, you will have to restart the mission if this happens.
Retrieved from "https://wiki.guildwars.com/index.php?title=Gate_of_Madness&oldid=2678886"
Categories:
Hidden categories: