Although the in-game descriptions of all summoning stones indicate that they "can only be used in explorable areas", they can also be used in missions and dungeons. Summoning stones cannot be used during solo quests or Augury Rock; however, they can be used during Tihark Orchard. There can only be one summoned ally in an instance at a time. This ally will follow the summoner, similar to minions, but they almost never break off combat, often leading to their demise in the event of a retreat.

1 The Igneous Summoning Stone is the only stone with infinite uses and that summons an ally that remains for up to 60 minutes.

Ball Hammer assigned to the Merchant 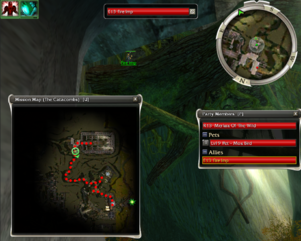 A summoned Fire Imp spawning in an unreachable location

Anomaly.When dropped on the ground, non-crafted summoning stones do not emit the typical sparkle effect.

Bug.Like other allies and miniatures, summons will remain stuck on the other side after the party has passed through a teleporter, e.g. in the Crystal Desert or in the Underworld.

Bug.In extremely rare circumstances, drops can be assigned to a summoned creature and cannot be picked up by anyone. However, once the item loses its assignment, anyone will be able to grab it.

Bug.In extremely rare circumstances, when using a summoning stone below a bridge, the summoned creature can sometimes spawn above it.