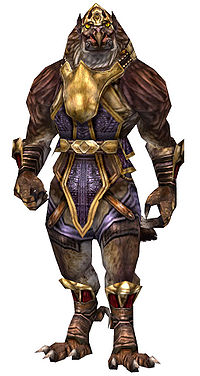 The Angchu Tengu of Cantha have long been cut off from their kinfolk to the north—though Canthan merchants travel frequently to Tyria, few take along Tengu passengers. The Angchu are one of two Tengu tribes found in Cantha, and are the more peaceful of the two. (The more primitive and warlike Sensali Tengu will attack any humans—and any Angchu Tengu—on sight.) The Angchu have found ways to live with the humans that nominally control their land, while the Sensali prefer a nomadic life. The Angchu Tengu have learned much more articulate ways to communicate, and for the most part remain at peace with their human neighbors. The Angchu reserve most of their hatred and aggression for the Yeti people of the mountains, their sworn enemies since the days before Cantha even existed as a unified nation. The Canthans tolerate the Angchu Tengu, but few view them as equal with humans.

The largest Angchu settlement is known as Aerie in the common language (which supplanted ancient Canthan long ago, even on the southern continent). Both Tengu tribes have many names for the place, but refer to it as Aerie when speaking to outsiders. Aerie is ruled by Merlin Featherstone[sic], a wise, gruff, but generally respected old Tengu who acts as the settlement’s mayor, sheriff, judge, and (if necessary) executioner. Most Canthans attribute the ongoing peace between Aerie and the humans of Cantha to Featherstone’s[sic] leadership. But even Merlin Featherstone[sic] cannot be held responsible if a foolish human tries to venture into Aerie (or any other Tengu village) during the lean months of winter. During that season, when fresh meat is scarce, the Angchu Tengu can become as hostile and territorial as their Sensali cousins.

The Angchu, led by Soar Honorclaw, are one of the two tribes of Canthan Tengu hailing primarily from the Aerie along the westernmost coast of Shing Jea Island, but can be seen around the Roost in Kaineng City.

The Angchu Tengu have a history of conflict, and have been at odds with humans, Naga and Yeti, as well as with their more nomadic Sensali Tengu bretheren. Through, in part, the efforts of Master Togo the Tengu Wars were finally brought to a cessation, and thus the end of the human/Angchu conflict. However, only the Angchu's conflicts managed to reach any resolution, and even so, some enmity still remains.

Since the Tengu Wars' end in 1071 AE, the Angchu have been attempting to live alongside humans and even in some cases, assimilate into human culture.