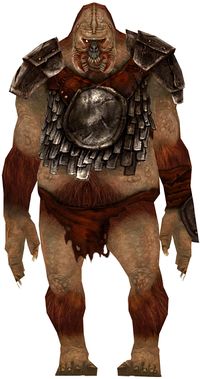 The primitive and brutal enemies of the Tengu, the Yeti are just intelligent enough to form a hunter-gatherer society, but one with a deep tradition of honor and courage (as the Yeti understand these concepts).

Yeti are lumbering furred hominids that live within the mountain ranges of Cantha, particularly known to live in Jaya Bluffs and the Qinkaishi Mountains.

Though primitive, they hold strong standards of honor and courage, and they find it unhonorable to die of old age, and the family of a Yeti who dies of old age would be scorned and shunned. Similarly, while usually hostile to outsiders, they will often be peaceful to those who help them or their friends and family in achieving or regaining honor. Many Yeti also hold strong ties to revenge and grudges, often leaving them to work alongside others they would normally fight to the death in order to achieve that revenge.

Yeti live in clans, which their surname is from, and live in a hunter-gatherer lifestyle. The Yeti are attracted to lights and fire, leading them to collect lanterns