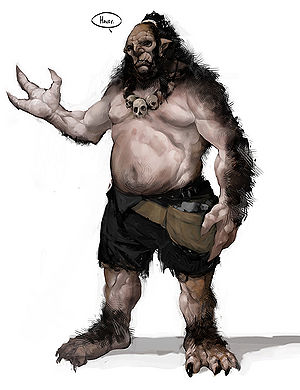 An ogre is a type of creature that is humanoid in appearance. Considered a diminutive race of lesser giants distantly related to Giganticus Lupicus, but still significantly large when compared to humans and norn. Although socially intelligent and sentient, they are primitives. Ogres are either warriors or indirect casters, such as necromancers and mesmers. The various sorts include Ettins, Yetis, and Jotun.

Weapons that deal extra damage to ogres include: The Ogre-Slaying Knife and any weapon with an of Ogreslaying upgrade.