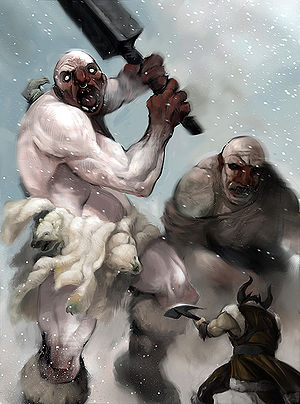 The jotun (pronounced JŌ-tun)[1] are a race of lesser giants with deformed-looking faces that are commonly encountered in the Far Shiverpeaks and the Depths of Tyria. They are also seen in the Verdant Cascades west of the Far Shiverpeaks. Wielding only the most rustic of weapons and dressed in crude loincloth, they do not seem possessed of much intelligence as the few who speak have poor grammar, much like the Yeti. At an unknown time in the past, the jotun were once a grand, wise and peaceful people – powerful, magical, and knowledgeable both in sorcery and natural philosophy – though now they are savages in their ancestor's citadels. The Norn and Dwarves are known to dislike the jotun, the former often hunting them for sport.