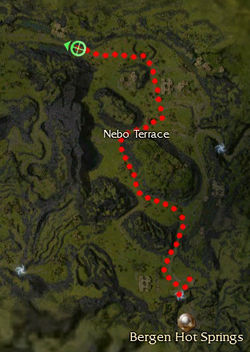 Solo players can start from Bergen Hot Springs. Avoid the first Skeleton group. There will be a fight between Tengus and Gypsie Ettins ahead. Once the Ettins win, they will head through the corridor towards the outpost and ball around you. Continue west (walking in front of Nicholas) by the skales and proceed north towards Nebo Village passing close to the Statue of Dwayna. Finally head west through the narrow corridor to Beetletun where there will be several Ettins. They usually group in 2-3. Stop when you see more Caromis.

If you have War in Kryta content active, this farm will be less easy. First of all, if Courier Falken spawns when you exit Bergen Hot Springs immediately zone as he will spawn additional groups of White Mantle along the route and run into them making the farm much harder. Furthermore, certain other spawns related to War in Kryta content, like the spawning of High Inquisitor Toriimo with a group of Krytan Villagers will replace all of the early Gypsie Ettin spawns. If these spawns do not take place, you can do the farm. Follow the adviced route apart from these details: instead of going west where suggested, which will have you fight several groups of White Mantle that can be hard to solo, go upwards facing more groups of Tengu instead.