This article is about the game mechanic of intoxication. For the title acquired by consuming alcohol, see Drunkard.

A player becomes drunk by consuming alcohol. This in-game intoxication is visually obvious: drunken characters will begin to act irrationally, randomly emoting and spewing various quotations. In addition, players will see their own display become warped and blurry (and certain alcohol will also change the screen color).

One minute after a drink has been consumed, the character will begin to "recover" and will lose one level of drunkenness. Note, however, that a character is not considered officially "intoxicated" until they are at level 3 -- at levels 1 and 2, they will not emote. Once a character reaches level 5, they are at the maximum tier of drunkenness and consuming further drinks will have no effect.

Death and zoning do not affect your drunken level. Should you die or zone, your level of drunkenness will continue to progress as normal. Upon resurrection, drunken visual effects may disappear until your drunkenness level changes. 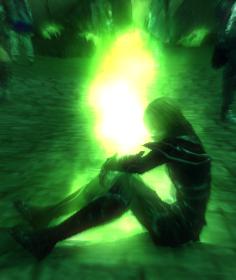 Certain types of alcohol alter the coloring of the post process effect; the particular tint is determined by which drink was consumed last and the effect might become stronger as you drink more of the same beverage.

Additional emotes, only observed when drunk on pirate grog: