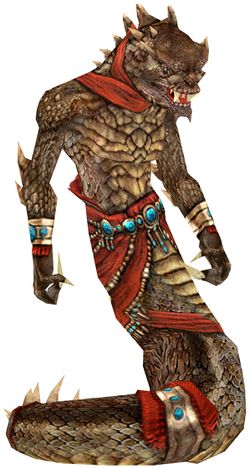 Tyrian visitors claim that the serpentine Naga resemble the Forgotten of the northern continent, but the two species are unrelated. Like the Wardens, the Naga people lost their homes when the Jade Wind struck. But the Naga population—water-dwelling creatures related to sea snakes which evolved a culture at peace with humans—was nearly wiped out by Shiro’s death wail. Thousands became one with the sea when it turned to gemstone. Hundreds more, mostly traders or mercenaries, died with the humans of Cantha on land. The only Naga that survived were those far enough away not to be trapped in the water when it turned to jade, and those survivors—only a few dozen in number—were scattered and terrified.

If not for a Naga priestess named Hanasha Coralfin the entire race might well have died out within a few years, perhaps even a few months. The priestess used what power she had left to revive those survivors she could find, who then brought more survivors to her, until a united Naga tribe of barely 40 individuals gathered. Under her guidance, the Naga abandoned their ancient moral codes and began to propagate freely and often, so that someday they might make the humans pay for what they had done.

Now, 200 years later, the Naga are nothing like the peaceful culture that shared the coast with the Canthans of old. They have aggressively taken back whole stretches of crystallized sea and petrified coastline from the humans, and make any journey through the Jade Sea even more perilous. 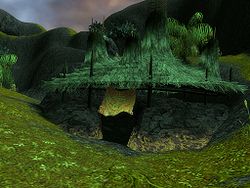 A hut found near Naga in Archipelagos.