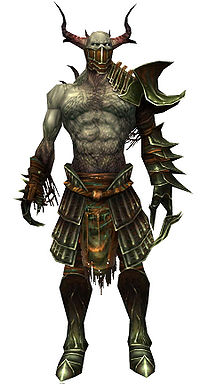 The mysterious and ancient Wardens guard the areas of Cantha hit hardest by Shiro’s legacy. Protectors of the Echovald that was, they now guard the petrified forest it has become. They may once have been human, perhaps powerful druids or holy men, but they long ago merged with the spirit they served to become something altogether different.

Now they stand as the ultimate protectors of the Echovald that is. The clan claims the right of vengeance for what Shiro Tagachi wrought, and blames all humans for the Jade Wind that stripped the woods and sea of life, but inexplicably left the Wardens unharmed. Driven nearly mad, enraged at their failure to fulfill their only purpose, they work in their own mysterious ways to reverse the effects of Shiro’s death, but until they succeed, they will threaten any humans they encounter.

Wardens do not take names as such, but take their monikers from their rank in the clan’s natural hierarchy. The lowest ranked, least powerful Wardens are associated with the smallest forms and shapes of nature—leaves, moss, seashells, and so on. Higher up are those Wardens who take their name from particular trees or larger forms of sea life, while those protectors that lead the clans take the names of the seasons. 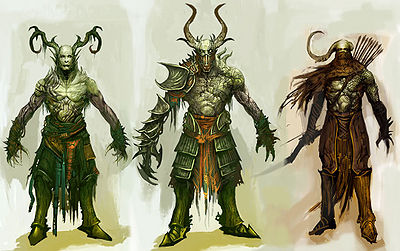