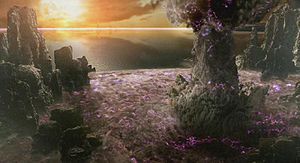 The epicenter of the Jade Wind as seen in Guild Wars Factions cg trailer.

The Jade Wind is the name of the event that occurred in 872 AE when Shiro Tagachi was slain. It is said to have been empowered by the magic of Dwayna given to Emperor Angsiyan which Shiro stole when he slew the emperor. This was done through the preparations of dark rituals before the visit to the Harvest Temple.

After having slain the Emperor, Shiro was in turn killed by the combined might of Vizu, Saint Viktor, and Archemorus and was said to have nearly been cut in half by the latter two with his own swords. In the moment before he died, Shiro let out a wail that unleashed the magic within him, causing the Jade Wind. The Jade Wind spread out, turning the Jade Sea into solid jade, and the Echovald Forest and the creatures within it to stone. Despite being untouched by the Jade Wind, even Kaineng City and Shing Jea Island suffered from the event due to increased refugees from the southern continent and a limited food supply.

Vizu managed to survive the initial blast due to being an Assassin and constantly shadow stepping to stay before the calamity. For almost half a minute she managed to survive, however she was turned to stone on a shore of the Jade Sea. The wail itself is said to have lasted hours.

The Jade Wind had other effects as well. It sunk the floating Harvest Temple and also corrupted most of the Saltspray Dragons; the few survivors include Albax.