This article is about a mission. This name is also used for an outpost and a Zaishen mission quest. For the explorable area, see The Ruptured Heart.

The objective of Ruins of Morah is simply to kill Varesh in one last attempt to prevent her from bringing about Nightfall.

You will fight against Varesh twice; during the first part, she fights you as Prophet Varesh, utilizing powerful AoE skills. The second part consists of fighting Commander Varesh as she leads Abaddon's demons to battle. 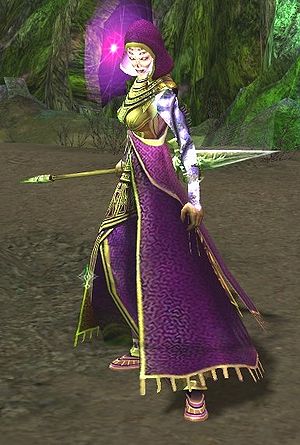 The dervish form of Prophet Varesh is awaiting the ritual to break Abaddon's prison with three Margonite Clerics in the middle of the crater. Kill the clerics first or pull her away alone.

Killing her is easy—but she will be resurrected after with a variety of Torment creatures—so it is recommended to fight away from the crater and close to the entry point of the mission. Use anti-melee skills (i.e. blind, snares and/or knock downs). Do not stand in either of her Earth or Frost Vortices.

There is a short interval between her first death and her new form as the paragon Commander Varesh. Use the time delay to rush back towards your entry point and flag henchmen/heroes. Torment creatures with the skill Call to the Torment (which allows them to duplicate) appear around the crater and start to patrol counter-clockwise. Her new form also has a monster skill called Enemies Must Die! which will focus all of the torment creatures' attacks on one of your allies - just like players targeting priority foes for heroes. Either take out a few demons first to finally strike her, or focus your entire firepower on her to kill her as quickly as possible. The second death of Varesh ends the mission.

Do not use summoning stones, spirits, or minions for this method.

Using caster heroes and henchmen only, move to where Varesh initially spawns in the mission. After killing the Clerics and then the first form of Varesh, instead of flagging your allies atop the hill, keep them with you in the center. If you stay in the center, most of the torment demons should patrol around the area without aggroing your party. Some demons might wander into your Danger Zone but by that time they hopefully shouldn't represent much of a threat.

Prophet Varesh: Abaddon reclaims his possessions, soon his true power will be revealed and the door to his prison opened.

Commander Varesh: I have returned! Abaddon's sword has been drawn, and he sends me back to you with tokens of his renewed power!

The gate to Abaddon's prison is nearly opened!
Welcome to your end.
You will not live to see the sun rise. If it ever rises again.
Your arrogance has doomed you!

Night has fallen on Elona.
The heroes must confront the dark god Abaddon...
In the Realm of Torment itself.