Travel along a difficult route to locate Gadd, then help him with killing some Ettins among the Dinosaurs.

This is a fairly long quest and you should have around fifty minutes devoted to do it. To get to the Shards of Orr dungeon, start at Vlox's Falls and head southeast. The Krait along the way should be relatively easy.

Once inside the dungeon, it is very helpful to take your time with the skeletons and zombies. Two groups at once will be very dangerous to the party. Holy damage is effective, while physical attackers will have trouble due to the many blinding skills. One method is to bring seven heroes with "Charge!"/"Incoming!" and/or "Fall Back!" and stagger their uses in order to run right past the enemies. If the party racks up too much Death Penalty, the zombie groups can be impossible to kill. It's sometimes possible to get past them by creative flagging of henchmen/heroes. Flag your healers off to the sides and a strong tank in front of the first group. Flag the rest of your henchmen on the second group, off to the side so they don't get tangled up in the first group. An alternate way is to take the north side when you reach the breach halfway through the map, because there are only two groups up there and no healers (however there are more warriors to do heavy damage). After half a dozen tries you should be able to pass them and activate the next Resurrection Shrine. Once you activate the second shrine, you can follow the path on the quest map to avoid the remaining mobs all together. 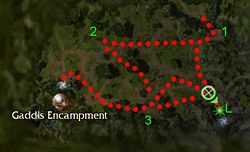 Once Gadd's Encampment is reached, talk to Bartholos. Head outside and to the right towards the Bloodstone Caves to meet Gadd and Livia at point L on the quest map. At first you cannot enter the Bloodstone Caves, but Gadd will be able to lift the seal by deciphering inscriptions that are tattooed on nearby Inscribed Ettins. Follow the quest markers to each of the three Ettins marked 1-3 on the quest map to the right. After killing them, make sure Livia gets close enough to extract the inscriptions. There are many roaming Raptor groups in this area, you may want to take care of them before engaging the Ettins. Return to the cave entrance at point L to let Gadd decipher the inscriptions and collect your reward from the Inscription Stone.

Livia
"Gadd is the most brilliant of the Asura. My fellow members of the Shining Blade have been helping with his research into the Bloodstones. They are currently on the far side of the Sea of Sorrows. The good news is we can get there by an Asura Gate. Head south and east to an underground complex called the Shards of Orr. An Asura Gate on the upper level leads to Gadd's Encampment. Find Bartholos, leader of the Shining Blade. He can tell you how to find Gadd."

Accept: "If it will help the Asura, it must be done."

Decline: "You can't get blood from a stone."

Ask: "You still haven't found Gadd? Bartholos will know where to find him."

Bartholos
"Ah, <character name>. Livia passed through earlier and said you're looking for Gadd. They went east, and should be at the Bloodstone Caves by now. If you hurry I'm sure you'll catch up. You'll find Gadd to be extremely demanding as an employer. Ready for some exercise?"

Livia
"The entrance to the Bloodstone Caves is sealed by mystic wards. Gadd says he can open it with the proper inscriptions, which are tribal tattoos on the local ettins. I don't know how he knows this, but I've learned to never doubt his word. You handle the easy part, and kill the ettins. I'll do the dirty work...collecting the inscriptions from their lifeless carcasses."

Gadd: "Fools! Keep these creatures away from me! Can't you see I'm working here?"

Livia: "Gadd works much better without hot monster breath on his neck. Protect us!"

Gadd: "Can't you do anything right? If I die this will all be a waste. Annihilate those things!"

After Livia has extracted all three inscriptions:

Gadd: "We have all three inscriptions. Let us proceed to our next objective posthaste!"

Gadd
"Well, it took you long enough. Did you stop for lunch while out hunting? It will take just a moment to decode these arcane inscriptions. Then you may have the honor of escorting me into the depths to find the Bloodstone... Now be quiet, oaf! I require absolute silence!"

Gadd: "Stay out of my way while I open the door, you knuckle-dragging oafs."