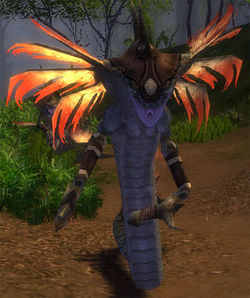 Found along the Tarnished Coast, the Krait rival even the Charr for viciousness and cruel ingenuity. These semi-intelligent creatures are vicious and xenophobic, attacking all other species on sight. Little is known about the elusive krait, but a few witnesses describe an army of slithering, serpentine warriors that seem able to transform in the middle of battle into numerous—and much more dangerous—forms. The reports are incomplete at best, as survivors of these encounters are often too hysterical to recall any salient details.