Foes and allies alike are physical presences on the battlefield — one cannot simply walk through another character. Players can therefore use their characters' bodies to block or slow the movement of another character. This is known as body blocking, a particular kind of snare that can be performed by any character.

Pets, minions, spirits, and NPCs have the same physical presence as other characters and so can participate in body blocking.

In outposts and PvE areas, friendly characters can be moved through without restriction (excluding some NPC allies that spawn due to a mission or quest, e.g. Kormir in Abaddon's Gate); however, in PvP matches, friendly characters (including pets and minions) can body block each other. For example, two warriors both chasing the same kiting opponent might body block each other -- allowing the target to escape with less damage. Keep in mind, your teammates have smaller bounding boxes than your opponents. This can enable your teammates to go through some body blocks, while the enemy can not. When this occurs, it can be best for one of the warriors to either break off and attack another target -- or position himself to approach the original target from a different angle.

The Master of Blocking on the Isle of the Nameless provides players with a short tutorial on body blocking. The skill can also be practiced in skirmish.

An animated example of corner blocking. Click to see animation. 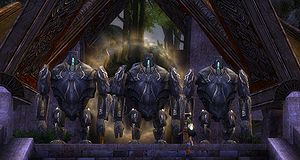 An example of Golems body blocking in pve.

While trapped in a bodyblock, several enemies will surround one target; this will leave them open to AoE attacks and spells. If a Dervish is trapped they can use their scythe and point blank area of effect skills to break a block. Elementalist AoE skills from the Fire and Earth lines and AoE Smiting skills from the monks can also be used to punish the body blocking players and break the block through heavy damage.

Area of effect snares, such as those in the Elementalist Water Magic line, or Shared Burden from the Mesmer line work well to break incomplete blocks by stopping the blockers from moving into the path of the block target.

Minions and Pets can be used to body block, although whether they do or not is largely a matter of luck. They can also block both enemies and allies which makes them more unreliable than other blocking techniques.

Strategic placements of Ritual spirits can be used by Ritualists and Rangers to set up blocks which do not require any other allies to maintain.

Both Warriors and Rangers, due to their high armor and/or defensive stances, are best able to maintain a block on a character as they can stand up to the damage from the opposition trying to break the block. They're also more likely to survive being blocked for the same reasons.

Caster classes can also participate successfully in blocking, especially if the opponents do not have AoE skills to punish blockers. When not positioning themselves defensively or kiting, a caster can position themselves to disrupt melee trains on others, slow flag runners, or prevent overextended attackers from returning to healing range.