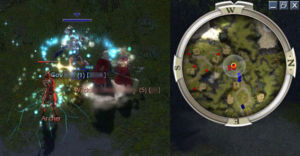 In Guild Wars, overextending is the basic term given to one who wanders too far away from their party's backline, dangerously into an enemy mob. While often fatal when caught by a high-ranked guild, a well-organized team with high mobility (e.g. shadow stepping) would be able to overextend often (mostly to kill enemies even when they flee) without as much danger. Often in guild battles, overextension is required to apply pressure or to kill.

To prevent overextension, one should usually stay within their team's backline, where healing and protection is easily applied. Overextension is also problematic for a team's backline itself. For example, if a Dervish runs too deep into the enemy group, then becomes snared and attacked, the backline of the Dervish's team would be forced to run into the enemy group to apply healing and protection to the Dervish. Now, the backline itself is in danger of being snared and killed off.

Reasons for overextending in GvG[edit]

Tips to prevent being killed while overextended[edit]