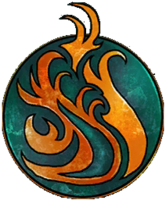 For a scant few seconds the storm that followed Shiro’s death wail roiled the sea, spawning waves that reached hundreds of feet into the air. An instant later, everything was frozen in place, but not because of a sudden cold front—the sea was not turned to ice. It had become solid jade. In order to survive, the Luxons had to adapt to a literally landlocked lifestyle, unable to transport goods to market or even sail to the nearby islands for fresh water. Their merchant ships had become one with the petrified ocean, and the currents that took them to farflung lands were now still as glass.

Today, the Luxons have grouped themselves into three different clans: the Serpent, the Turtle, and the Crab. To keep order, the Luxons vest authority in their Council of Elders, the ruling body that meets each year to modify and approve the “code” that all the clans will follow for the next 12 months. Although the clans often battle against one another, this is less about warfare and more about demonstrating which clan is the strongest and most powerful. These battles are usually fought by each clan’s champion, along with that champion’s elite guard. No matter how much the clans may disagree, they all come together when the Kurzicks need to be taught a lesson.

The Luxon Armada dwells on the Jade Sea and is one of the two vassals of the Empire of the Dragon, the other being the Kurzicks of the Echovald Forest. The Luxons are a very nomadic and combative faction. They are at constant war with the Kurzicks due to ancient hatred, reasons for which have been forgotten, and the desire over the scarce and precious Amber and Jade that was solidified from the Jade Wind. Their nation is led by the Council of Elders and their three clans - The Crab, The Snake, and The Turtle.

According to An Empire Divided, historians believe the Luxons once sailed in the Crystal Sea over a thousand years ago. Incidentally, this may be where the Margonites sailed. Due to the removal of knowledge of Abaddon, some knowledge of the Margonites has been removed, leading scholars to view them as myths, thus possibly causing a confusing between the two sea-faring people.

Though the Luxons' origin is unknown, it is however known that they were known as Luxons and were nomadic people long before the Empire of the Dragon was united by Kaineng Tah. They suffered from persecution and war after Yian Zho succeeded his father's throne in 46 CC (464 BE). The persecution was filled with mass executions of Luxon Elders for some time, until the Luxon people united and attempted to secede from the Empire. In 48 CC (462 BE) they gained new status as a vassal clan of the empire to prevent any more killings. Under orders of the Empire of the Dragon, the Luxons waged war on the Kurzicks alongside the Empire's troops. This is believed to be the source of the hatred between the Luxons and Kurzicks.

During Emperor Angsiyan's reign, the Luxons and Kurzicks became more and more enveloped by the Empire through treaties, and were at peace with each other for a short time, until Shiro Tagachi slew the Emperor and the two vassals' champions, Archemorus and Saint Viktor. With their deaths, the war between the two vassals continued on and became even more intense with the loss of being able to gather their own food.

In 1527 CC (1017 AE), the Luxons and Kurzicks had openly declared war with each other. Although it was well known to be war long before, the so called 'unofficial skirmishes' that constantly occurred became official acts of war.

However, in 1568 CC (1058 AE), the all out acts of war returned to borderline skirmishes due to Emperor Kisu creating and signing new treaties with the Kurzick leaders.

In 1582 CC (1072 AE), the Luxons found a temporary peace with the Kurzicks once more due to Shiro Tagachi's return and the newest threat to all of Cantha. This peace did not last long though, and fighting quickly resumed shortly after Shiro's second death.

The Luxons thrive on travel, as they always have, and determine many things through strength in combat. Criminals to the Luxon Armada are executed via gladiatorial games. As they are constantly moving, their settlements are hardly filled with people. However, there are Luxons who stay in a single place year round. The Luxons also have structures called Leviathans, fish-like and crab-like structures such as the Halcyon, that are transported via both manpower and magic. Being combative and having the grand structures, the Luxons' patron gods are Balthazar, Grenth, and Lyssa. The first two worshiped for their combative nature, and the last worshiped for the beauty of their architecture. Along with these three gods, the Luxons also worship three demi-goddesses known as the Three Queens: Alua, Elora and Ione.

Every year the Convocation takes place in which the victorious clan keeps the Spear of Archemorus, the Luxon's most prized possession, until the next Convocation. The leading clan also acts as the leader of the Luxon Armada for the year.

While always nomadic, the Luxons acted differently than they currently do before the Jade Wind swept through the land and turned the sea to jade. Before, the Luxons sailed in ships across water. When the Jade Wind struck and the water turned to jade, the Luxons dismantled their ships and made new structures out of them, eventually building the Leviathans that can be found today.

While the Luxon Armada is a combative group, and disputes are settled through combat between the disputants, there are also Luxons who have been cast out. They are known as Outcasts. Whether it is because they went mad, or because they are traitors, the Outcasts no longer participate in the nomadic and combative Luxon society. Those that go insane are believed to eventually turn into Oni by the curse of Kanaxai. There are also incidents where Outcasts work alongside Kurzicks, however these incidents are rare.