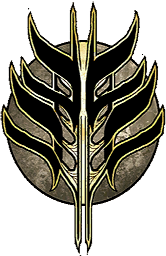 When the Jade Wind swept through the branches of Echovald Forest, it turned everything to stone. Birds crashed to the forest floor in mid-flight. Deer leaped from the ground as flesh and blood, and came to earth little more than life-like statues. Now, two centuries later, life has cautiously returned. The Kurzicks were the first to venture back to the forest. There they have adapted to their petrified surroundings and have begun to carve their culture into this new landscape.

To the devout Kurzicks, everything is a sign; a portent of what is to come. They find a divine message and meaning in everything they witness. This church-state is ruled by the Council of Nobles, which makes decisions and laws only after receiving counsel from the spiritual leaders, known as the Redemptors. Great Houses govern the Kurzicks, ancient families that can trace their origins into Cantha’s distant past, and beyond.

Today there are five main Houses, two of which are the most powerful and influential. It is common for the Houses to argue among themselves, but when it comes time to fight the Luxons, the Kurzicks quickly forget their internal squabbles and focus their hatred on their long-standing enemy. Since Shiro’s death and the petrification of the forest, the Kurzicks have built their elaborate homes and cathedrals directly into the fossil trunks of enormous trees that make up the forest. Kurzick culture is built on ceremony, rituals, and traditions, and this is reflected in their elaborate architecture and art.

The Kurzicks occupy the Echovald Forest and are one of the two vassals of the Empire of the Dragon, the other being the Luxon Armada. The Kurzicks are a nation of very religious people who take the worship of the True Gods very seriously. They are at constant war with the Luxons due to the struggle for the scarce and precious Amber and Jade solidified at the time of the Jade Wind. Their nation is led by the Council of Nobles and their culture by the Great Houses - House zu Heltzer, House Vasburg, House Brauer, House Lutgardis, and House Durheim. 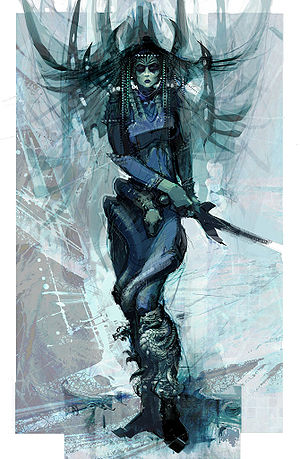 Concept art of by Daniel Dociu.

Though it is unknown exactly when the Kurzick culture emerged, it is known that they were referred to as Kurzicks long before the Empire of the Dragon was united by Kaineng Tah. After the war and persecution of the Luxons from Yian Zho which ended with Luxons becoming a vassal clan in 48 CC (462 BE), the Luxons turned their ire and fought the Kurzicks alongside the Empire's troops. This is believed to be the source of the hatred between the Luxons and Kurzicks. The persecution initially led to the unification of the Kurzick people in a bid to fend off the Empire, but in 51 CC (459 BE) the Kurzicks eventually became a vassal clan of the empire, like the Luxons had 7 years before them.

During Emperor Angsiyan's reign, the Kurzicks became more and more enveloped by the Empire through treaties, which led to peace with the Luxons for a short time, until Shiro Tagachi slew the Emperor and the Kurzick and Luxon champions, Saint Viktor and Archemorus. With their deaths, the war between the two nations resumed, and even intensified due to the new inability to gather their own food.

In 1527 CC (1017 AE), the Kurzicks and Luxons openly declared war, acknowledging the so called 'unofficial skirmishes' that were constantly occurring as official acts of war.

However, in 1568 CC (1058 AE), the formal war returned to a series of border skirmishes due to Emperor Kisu creating and signing new treaties with the Kurzick leaders.

In 1582 CC (1072 AE), the Kurzicks and Luxons forged a temporary peace once more due to Shiro Tagachi's return and the newest threat to all of Cantha. This peace did not last long, and war quickly resumed shortly after Shiro's second death.

The Kurzicks are very religious and most of what they do revolves around their practice of worship of the True Gods and their saints. The different houses, whether part of the Great Houses or not, all have a different characteristic among the members of the house. All of the characteristics of the houses are based on the idea of art, music, and religion. The Kurzicks are also focused on preserving and restoring the Echovald Forest to how it was before the Jade Wind. This includes the creation of wards and stone guardians that defend the Kurzicks against the monsters, unless they are not maintained - in which case the wards will simply fail and the stone guardians will become hostile. The spells are by the House zu Heltzer. Along with the House zu Heltzer's wards and protections, the House Lutgardis is "able to reinvigorate the forest through song" as said by the Historian of Houses.

Along with their own characteristics, each Great House has a different patron god from the other houses which they revere more than the other gods. They also have patron saints, who are usually - if not always - an ancestor of that house. It is unknown if the lesser houses have a patron god or saint. Many Kurzicks look toward their Redemptors for spiritual guidance and to act as connections to the saints and the gods. The Redemptors also council the Council of Nobles that leads the Kurzick nation. Aside from the Redemptors, other highly honored positions among the Kurzicks are the Tree Singers, which are the main force behind the Kurzicks' most honored ceremony, the Awakening Ceremony, in which Kurzick volunteers become Juggernauts. Some outsiders may consider the way Juggernauts are created - which is through a volunteer "sacrificing" their body, though they retain their original personality - as inhumane.