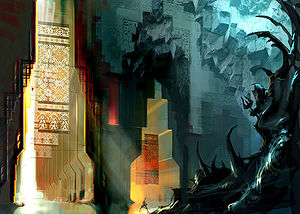 The sunken city of Arah was the home to the Human Gods when they resided within the nation of Orr. There is little evidence to show where the gods came from, or where they have gone in these modern days.

Originally founded by the gods when they brought the humans to Tyria, Arah became the capital of Orr after the Exodus of the Gods, later growing into the center of a powerful nation that viewed the maintenance of Arah as its sacred charge. For nearly a millennium the Orrians acted as custodians of the city of Arah. When the Guild Wars of 1013 AE resulted in open fighting in the marble streets of Arah, the Orrians abandoned their neutral stance in order to protect the city.

In 1070 AE, the Searing shattered Ascalon's defenses and allowed the Charr to launch a full offensive against Kryta and Orr. Though prepared for the sudden attack, the Orrian defenses were overwhelmed and the Charr marched on Arah, intent on its destruction. Attempting to halt the incursion (but in fact unknowingly doing the work of Razakel), the adviser to King Reza, Vizier Khilbron, took it upon himself to venture into the catacombs of Arah and read from a forbidden scroll, causing the Cataclysm. While the Charr were destroyed and never stepped into Arah, the Orrian peninsula was shattered and sank beneath the waves, taking Arah with it, leaving only the wandering dead on the few islands that remained above-water. In the intervening years, many of the treasures of Arah and Orr have been taken by Corsairs, who often dock in the shattered peninsula.