From Guild Wars Wiki
Jump to navigationJump to search
Spoiler alert: The following text contains spoilers relating to the story of Guild Wars. 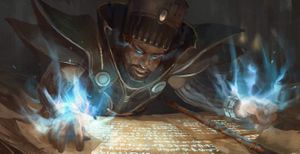 Vizier Khilbron reads from the Lost Scrolls. Some of the text is visible.

The Lost Scrolls are forbidden texts containing dark magic that were hidden away by the Old Gods deep below Arah. They are known to contain powerful magic, but their exact contents and origins are unknown.

At the end of the Third Guild War, the Charr invasion force headed south to Orr and, despite the Orrian's preparations, overran the Orrian defenses and reached the Gates of Arah in less than twelve hours. To push back the Charr, Vizier Khilbron rallied the people and revealed he had a plan. It was later discovered that he had forbidden books in his quarters, and that he had been converted to the worship of Abaddon, but by this point it was too late to stop him. The Vizier had traveled into a warded vault, deep within the catacombs in Arah, and brought the Lost Scrolls to his tower where he read the scrolls. In a brilliant flash of light, the Charr army was killed where it stood, and the entire peninsula of Orr sank beneath the waves. This event was called the Cataclysm.

As well as the Cataclysm, the scrolls raised many of the fallen of Orr into an undead army. Many believed that they were lost souls so disturbed by the destruction of their home in the Cataclysm that they refused to pass into the next life, but in fact these creatures were motivated by a powerful lich lord, the reanimated Vizier Khilbron, who had raised the resting dead to do his bidding. It is not known whether Khilbron was created by the Lost Scrolls or not, however.