The world of Tyria is filled with many different races and cultures that practice various philosophies and religions, ranging from kingdom-wide faiths to small cults found scattered throughout a region. Beliefs of encountered races are not all known to the players (such as the faiths of the Centaur, Dredge, Grawl, and Tengu), but many are thought to have their own faith. Even though the worship of the beings that are both called gods and are such in nature is mostly seen in humans and Forgotten, there are also individuals and groups in other races who worship them. 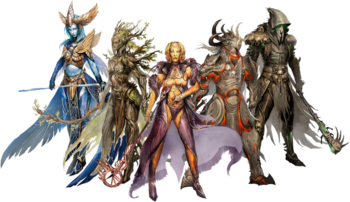 Dervish forms of the Gods of Tyria: Dwayna, Melandru, Lyssa, Balthazar, and Grenth (respectively from left to right).

The Human Gods, also known as the Old Gods and the True Gods, are the most commonly worshiped gods in Tyria. They are the beings who in the religion of the advanced races, created the world of Tyria, gave magic to the races, and who bestow the Favor of the Gods. These gods are Balthazar, the God of War and Fire; Dwayna, the Goddess of Life and Air (also the leader of the True Gods); Grenth, the God of Death and Ice; Lyssa, Twin Goddess of Beauty and Illusions; Melandru, Goddess of Nature and Earth; and Abaddon who was replaced by Kormir, Goddess of Truth and Knowledge.

In the land of Kryta lies a unique faith. An organization known as the White Mantle, which protected the nation from the Charr invasion, came to rule the land and preached of their new gods that gave them strength. The faith was founded by an exile by the name of Saul D'Alessio who stumbled upon the beings which would become his new gods when he was on the brink of death, and was saved by them. When he returned to Kryta in its time of need, his faith led to the salvation of the nation and the group which he founded flourished. Their gods, known as the Unseen Ones (for they never revealed themselves except to their most faithful worshipers) led the White Mantle with an unnoticed grasp for years until their reign ended with the fulfillment of the Flameseeker Prophecies. Though both the Unseen Ones and the White Mantle survive, their rule is no more. 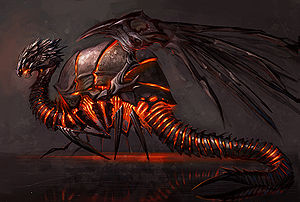 Concept art of the Great Destroyer.

However, even though the name of either were never spoken, the Great Destroyer still rose and caused the end of the Dwarven race as a major influence in the world of Tyria.

Spoiler alert: The following text contains spoilers relating to the story of Guild Wars Eye of the North.

The Charr were originally a misotheist or "God-Hating" race that sought to fight against the Six Gods. When they were beaten back by the humans who used the help of the True Gods, the Charr sought their own gods. Two hundred years before the Searing, the Burnt Warband of the Flame Legion found gods of fire for the Charr at the volcano, Hrangmer. Through those gods, the Shaman caste was made and ruled over the Charr. After the events of the Flameseeker Prophecies, however, the Charr's gods were discovered to be titans and were slain by human adventurers. This caused the start of a rebellion against the Shaman caste. Desperate for control, the Shaman caste found new fiery gods which were shortly killed by both humans and the Fierce Warband, after which the Charr swore never to worship any gods, and once more became a misotheist race.

See also: Spirits of the Wild

The Norn do not worship the True Gods, or even worship any kind of deity. Instead, they respect and revere the beings which they call the Spirits of the Wild. These beings are spirits of nature - friendly spirits taking the form of animals and hostile, sometimes malicious, spirits taking the form or aspects of nature. The Bear Spirit, Raven Spirit, and Wolf Spirit are the three most prominent animal spirits, and the spirits of the Mountains, Seasons, Fire and Darkness are the only known hostile spirits.

The Asura do not necessarily believe in any personal god but, rather, ascribe to the belief in an all-encompassing philosophy of reality as a harmonious system seemingly based upon a single governing principle called Eternal Alchemy, often referred to as a large (or greater) equation. From this viewpoint, the whole universe and everything in it are but expressions of Eternal Alchemy, which lies at the heart of everything. The Asura believe the central equation can (and one day will) be determined through reason and the observation of the natural world.

The Asura believe that the Eternal Alchemy is expressed through "cogs", often called aspects or facets, which are each individual person or aspect of life. The True Gods are considered by some Asura to merely be larger cogs within the Eternal Alchemy. Most of the Asura work towards uncovering the secrets of Eternal Alchemy. A burial rite involving cremation of the body has been observed among the Asura, however, it is unclear if it is related to the belief of Eternal Alchemy. To them, death means returning to the grand equation and allowing it to continue its work.

Those bound by mortality will inevitably discard their physical shells and pass on into a higher state, the details varying from culture to culture. For worshipers of the Six Gods, it is followed by Grenth's judgment of the deceased and their actions during life, however the destination of the soul changes with regional beliefs. The Underworld is thought by Tyrians to be their final resting place, while Canthans associate the respective realm with dishonor and expect to ascend to Eternal Paradise should they lead a life free of sins. This tendency towards ascension is akin to the Deldrimor dwarves' Great Forge, where they hope to join the Great Dwarf, and the Tengu's faith in the Sky Above the Sky, although the avian species shows no signs of worshiping human gods; these realms are said to be located within the Mists.

Throughout the world, there are pockets of small cults and faiths, or faiths combined with others that are not common elsewhere. From the Canthan worship of their ancestors to the stone face worshipers of Istan, minor faiths exist and are commonly ignored.

Cantha has a unique belief which is ignored in other lands. Canthans worship their ancestors for their own power and blessings. The Kurzicks, for instance, pray to their patron saints of their houses. Unlike in other lands, the Canthan heroes are revered to such degree that the spirits of their heroes stay in places such as Tahnnakai Temple. Furthermore, the Ritualist profession once was solely dependent on the power of one's ancestors before the gods gave magic to the world.

Along with the True Gods, the Luxons in the Jade Sea worship three demi-goddesses called the Three Queens: Alua, Elora, and Ione. Nothing is known of these three demi-gods.

Order of the Stone Face[edit] 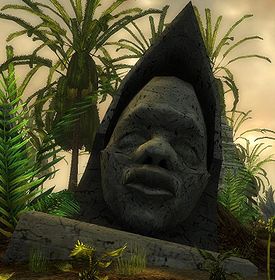 An odd and small cult that exists is the Order of the Stone Face, a group which is led by Tahon and reveres a statue they call "The Stone Face" which can be seen in Zehlon Reach. The cult has the goal of Eternal Bliss and Transcendent Glory, though most of the tasks given by The Stone Face through Tahon deal with food.

Another small cult that exists on the island of Istan would be the Skale cultists that can be found throughout Mehtani Keys and Zehlon Reach. Usually, they are seen surrounding various Skales often worshiping or dancing for the Skales.

Along with the Istani worshiping Skales, the Skales themselves have their own deity known as Moa'vu'Kaal, however Moa'vu'Kaal is not a god, but simply an ancient, and powerful Skale.