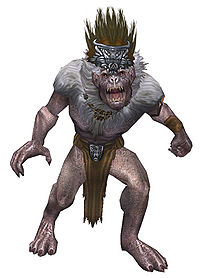 The Grawl are humanoid creatures roaming Tyria from the Charr Homelands to the southern areas of the Shiverpeak Mountains. This species has an ape like physique and seems to possess a primitive form of culture with a social hierarchy and different professions.

While the Grawl are seen fighting beside the Charr quite often, there is no clear evidence that they are allies. The only sign of organized cooperation between the two was working alongside Vatlaaw Doomtooth and later an attempt to form an alliance by Torch Harrowkeeper. Galton Franks, a collector for the Ebon Vanguard, seems to believe that "the grawl are either proto-Charr or, more likely, an important source of Charr nutrition".

While the exact nature of their religious beliefs are unknown, Durmand believes that their necklaces hold some evidence for their religious tendencies. Along with that, the Grawl seem to congregate at a few locations with statues to the Gods of Tyria - such as at Melandru's statue at King's Watch, Lyssa's statue outside the Ruins of Surmia outpost, and outside the Temple of Grenth.

In Regent Valley, there are groups of Grawl who fight each other: the Grawl Petitioners and Grawl Heretics. These two groups indicate a form of civil or religious split.

As theorized by Nicholas Sandford, the number of necklaces worn by a grawl may indicate a special status or strength. Nicholas further speculates that the Grawl have to outnumber the necklaces worn before they can attack.