There are many languages in the universe of Guild Wars. Nearly every race and nation has their own language, though many races and nations seem to be merging their own languages into a single well known but unnamed language. Most languages are written and hardly seen actually spoken in the game through dialogue, with the exception of various idioms.

Never explicitly named, most of Tyria's intelligent creatures appear to speak various dialects of the same language. It is possible that this language is called "human" due to the article The Ecology of the Charr stating that Hrangmer "translated into human, the name means 'Jaws of Oblivion.'"

The Ascension glyphs are three runes that represent the first three missions of the Crystal Desert - Elona Reach, Dunes of Despair, and Thirsty River. After each of these are activated, the path to the Hall of Ascension opens up.

These runes are also seen on various pillars with two other unknown runes, and in Augury Rock on the ground.

According to Matthew Medina, the three Ascension glyphs and the other two glyphs are ancient pictographs of the three areas needed to be unlocked to gain access to Augury Rock. Furthermore, he says that "it would be safe to assume that the same forces who created Augury Rock/The Hall of Ascension created the "key" for unlocking it and the symbols that go with it."[1] 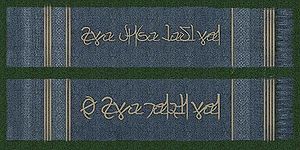 The Asura have their own language from when they were underground, but quickly adapted to the "common" language, so there are very few instances of the Asura language used. There are only two cases of the Asura language being seen. The first, and most familiar, is the term Bookah. The second is the Asura banners on the Asuran Beacon and the banners behind the Golem Kilns in the G.O.L.E.M. mission.

Before their surfacing, the Asuran language was half-mathematical and half-structured.[4]

"Bookah" is a large, loud, bellowing, and dumb imaginary creature that the Asura used to frighten their children. Since their surfacing, they use the term to refer to those they view as inferior beings, which to them is almost everyone who is not an Asura. 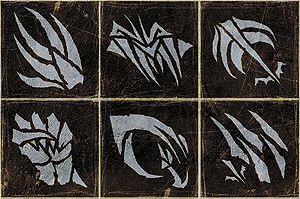 The Charr seem to speak a dialect of "common" with a number of unique words and idioms, and occasionally use grunts and roars.

They do not have a written language of their own, but they do use a limited series of ideograms, as seen on the Charr Battle Plan Decoder wheel. Each ideogram represents a quality or an entity that the Charr admire or respect, such as strength, courage, victory, honor, etc. Charr ideograms were not widely embraced, in part as a reflection of the Shaman caste's draconian rule, until Pyre Fierceshot led the revolt against them. [5]

Other than their own names, the only known Grawl word is a noise rendered as "*oot!*".

Ascalonian uses a runic alphabet, making it versatile for writing and clearly translatable. Although most Ascalonians cannot read or write, Ascalonian was easily recognized and was used everywhere on contemporary structures and ancient artifacts, as well as other sources.[7] 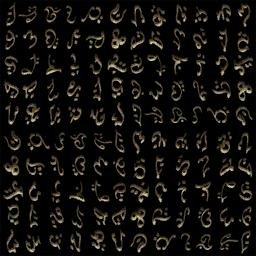 There is no Elonian language as much as there is an Elonian dialect with various words and phrases used alongside "common." Elonian words are generally only used in place names, making it difficult to determine their meanings through context.

The written language of Elona can be found throughout Istan, Kourna, and Vabbi - the prime location being scrolling runes in the Halls of Chokhin called "stacks" by the librarians. They can also be found on the "plinths" - large pillars with a purple glow - found throughout the Realm of Torment and in Bloodstone Caves.

The spoken version of the old language of Cantha has been largely supplanted by "common." Nowadays, there are few people who speak the Old Canthan language, however, a number of words and phrases have been integrated into the Canthan dialect of "common."

While Old Canthan is hardly spoken anymore, the written version is still widely used throughout Cantha and it is near impossible to move around without seeing uses of Old Canthan. 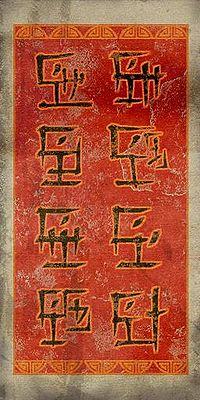 A banner listing the eight professions in Guild Wars Factions.

Along with Old Canthan, an old form of the Kurzick language still exists in Cantha. However, the only known example of Old Kurzick is the Songs of Arboreum, performed by the Tree Singers during the Eternal Grove mission, its lyrics are as follows:

The chant appears to be a mixture of English, Latin, Yiddish, and German. A rough fan-made translation is:[9]

"A holy protector to defend the forest."
"Equal in the mystery."
"An eternal tree."
"By which we resurrect the dead." 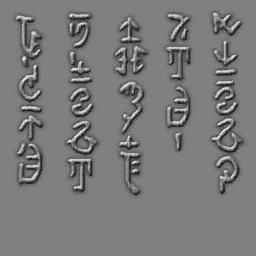 Old Krytan uses a series of runes that is usually arranged in a vertical format and is more akin to primitive syllabary than an alphabet. Due to the heavy use of contextualization, which is only easily understandable to the most learned scholars, Old Krytan began to fall out of favor with modern Krytan citizens. However, Old Krytan still shows up on some Druid stones, ruins, signposts, and a handful of other places.[7]

Old Krytan was extremely hard to use due to the pronunciation of runes changing depending on if the rune was alone or in a particular order to other runes, with changes in order changing the sound of the rune. Effectively, switching the order of two runes give a completely different sound (e.g., One sounds like "AH" and the other sounds like "MUH," when combined to make a simple word, they can either create "ACH-MEH" or, if reversed, "MIH-YEH").[10]

Mursaat runes circling the pedestals that the Eye of Janthir sits upon.[11]

Not much is known of the runes belonging to the Mursaat, however they are found in two locations: In Shaemoor, where the Eye of Janthir sits, and in the Hall of Judgment.

It is unknown if their placement in the Hall of Judgment is canon to lore, due to the limit of resources the Live Team had when the area was created.

The Titan language, along with Titan names, seems to be based on latin. There is currently only one known phrase:

Little is known about most runes found throughout world, leaving them as complete mysteries to most.

This language is spoken by the Ephemeral Spirit, the only known speaker of this language, at the end of The Path to Revelations quest. The language follows a substitution cipher.

There are runes that appear throughout Tyria, Elona, and the Mists which have an unknown origin. These runes can be found on the walls of the Tomb of the Primeval Kings (though it is near impossible to see them anymore except during Halloween), various doorways, ramps, and pillars throughout the Underworld, various doorways and ramps in the Catacombs, on banners hanging from various tents in Ascalon and Kryta, in a few locations in Vabbi, primarily Forum Highlands, and throughout the path to the Hall of Heroes (such as Burial Mounds).

Despite these being the most widespread set of runes, there is nothing ever stated on them. They are sometimes accompanied by an eye-like symbol which is seen on pedestals which contain Mursaat runes on them, any connection is unknown. The runes are also often accompanied by a circle or a series of circles which contain the runes in layers.