The Rift is a story telling the story of Devona, Aidan, Mhenlo, and Cynn.

The Tombs of Drascir rose up like the walls of a fortress. Devona, Aidan, Cynn, and Mhenlo stood looking up at it. Four other Ascalonians had joined them for this quest, bringing their combined number to eight. 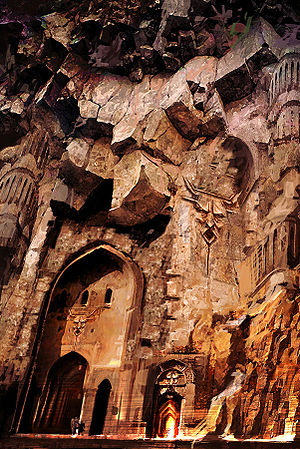 From behind a tombstone, a ghostly figure materialized.

"I know what it is you seek…." His voice rolled over the empty plane, hollow and ethereal as it echoed off the side of a mausoleum. "For I too wish to claim the Hall of Heroes." With his wispy hand, the ghostly figure gestured to the group to move forward. "Follow me. Together we shall open the portal and cross over into the Underworld." With that he turned and glided across the ground to a set of stairs at the base of the tombs. At the top of those stairs stood an altar, and behind that what looked like a huge pair of doors leading inside.

Devona looked back at her companions. "Who…or what…is that?"

Mhenlo placed a reassuring hand on the warrior's shoulder. "That is Lord Victo."

Devona felt a chill run down her spine. "The Lord Victo? The Champion of Orr? The commander of the Orrian Armies at the Battle for Arah?"

"Hurry," said Lord Victo, as he reached the top of the stairs, turning to float before the elaborate altar. "The unworthy dead grow restless. Do not allow them to interfere." 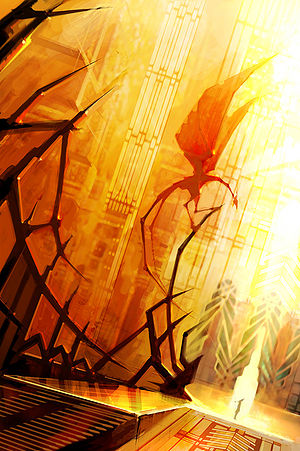 The ground erupted as nearly a dozen zombies clawed their way out of their earthly prisons and toward the ghostly lord.

Lord Victo turned toward the altar and raised his arms to the heavens. "Spirits of the Rift, hear my plea…"

Devona drew her sword. "To Lord Victo!" she cried. The warrior charged, followed closely by her seven companions.

The group cut their way through the shambling undead with little difficulty, moving up the stairs to take up a defensive stance around the chanting ghost.

"I beseech you," shouted the ghostly lord. "Open the way…"

"Here they come." Cynn stepped to the edge of the raised platform upon which they stood, pointing off to their right. "And they're coming fast."

Devona only had time to flick the last bit of desiccated flesh from her sword before a wave of skeletal warriors was upon her. In the blink of an eye, she was surrounded. Her blade danced in the night air, reflecting the eerie light from the glowing green torches beside the altar as she cut chips of bone from her foes. The skeletons responded in kind, slashing at her with dented axes and rusted swords.

When she felled one, another took its place. Her arms bled from multiple wounds, and her face burned where she had been slashed by skeletal claws. But Devona had no time to think about such trivial things. She fought now for her life.

Then suddenly, the voice of Lord Victo rose above the sounds of metal on metal and bone being smashed to bits. "The spirits have heard our plea."

And in the next moment, the tombs were gone—in a flash replaced with the most resplendent architecture the warrior had ever seen. Golden statues of angels with stained-glass wings clasped hands over a sparkling hallway made of gemstones.

Plants of brilliant orange and purple swayed in a light breeze, their leaves making a slight tinkling sound as they brushed together, as if they were made of glass or crystal. And in the distance, Devona could just make out the walls of a tremendous palace. Its edges caught the light perfectly, giving off a soft, warm glow like the rays of a setting sun.

"Do not get too comfortable," said Lord Victo, interrupting the warrior's thoughts. "Our journey to the Hall has only just begun." He looked at each of the eight humans in turn. "And there are others in this place who would gladly give their lives to see us fail."