The Underworld is the first actual PvP map players will encounter when entering Heroes' Ascent. In the GW universe, it is located somewhere in The Underworld, which is located in The Mists.

The Underworld consists of two areas in front of each team's base. In the middle is a walkway with a ramp on each side and a bridge leading to the far edge of the map. Under the bridge is a small corridor connecting the two areas. 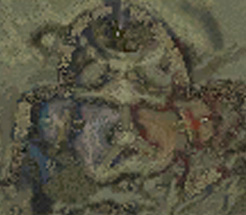 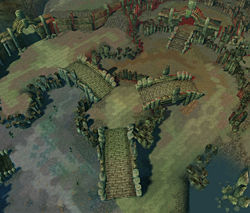 Bug.Due to clipping errors on the bridges on this map, it is possible to move to a position along the wall of a bridge where one cannot be hit by attacks. Players at this location may still be hit if attacked by another player below the bridge.
Retrieved from "https://wiki.guildwars.com/index.php?title=The_Underworld_(arena)&oldid=2573835"
Categories: