From Guild Wars Wiki
Jump to navigationJump to search
Warning: Key elements of this lore-related article are incomplete. You can help the Guild Wars Wiki by expanding it.

This article catalogues the various architectural styles that can be found in Elona. All the names given to the various styles are fan-made and included purely for convenience.

Elonian history can be separated into distinct periods:

Believed by Turai Ossa to be Margonites.[1] 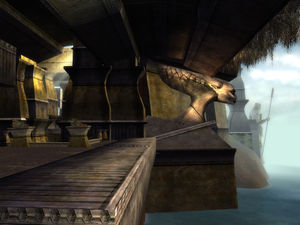 This style is generally made of a darker stone than other architecture dating from the Primeval Dynasty and features more curved edges and inverted pyramids. It is likely the oldest style of architecture made by humans in Elona, as the Primeval dynasty originated in Istan.

Monuments of this style are often carved out of stone. After Nightfall, symbols of Abaddon appeared on many of these ruins. 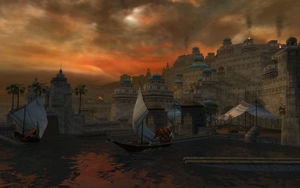 Built into the rock and walls.

Similar to the "Kournan contemporary" style seen in Gandara and Jahai, but more practical - fewer domes and arches. 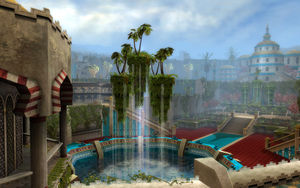 Similar in some respects to "Kournan contemporary". 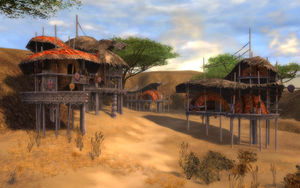 Structures built of wood on stilts, often with brightly-coloured adornments including shields and beads. Permanent structures, where they exist (such as wells) are built out of mud. 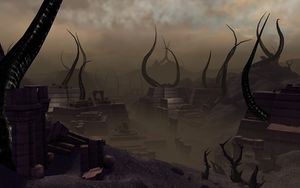 Monuments of this style are often built with brick or stone. Most shrines to the Gods in Elona are of this style. These structures are generally less ornate than the Istani variant. Some of them have inscribed hieroglyphics.

Tomb of the Primeval Kings[edit]

Sandstone pillars, arches and barrows. These can sometimes be found mingled among Primeval ruins, and occasionally even among ruins in the style of Turai Ossa.

These can be found mingled among Primeval ruins and "weathered Elonian". These are ruins assumed to be from around the time that Turai Ossa was alive, as they are reflected in the ruins from his failed expedition to the Crystal Desert; however some, like the ruins of the city of Morah, date back to the Exodus of the Gods.