Storyline of Eye of the North

From Guild Wars Wiki
Jump to navigationJump to search
Spoiler alert: The following text contains spoilers relating to the story of Guild Wars Eye of the North.

This storyline article is a recount of the story of Guild Wars Eye of the North, the first expansion of Guild Wars released in August of 2007. Becoming familiar with key dates in the timeline, the History of Tyria, Storyline of Prophecies, and GW:EN and Now will help make certain events in this story clearer.

The story in this expansion revolves around events happening in the continent of Tyria. The players are cast as the heroes who save Tyria from an ancient threat of fire and stone. In this summary, events will link to their own articles and will only be "re-explained" here as much as needed to enhance readability.

Act I: The Beginning of the End[edit]

Act I takes place after a series of earthquakes in Tyria, Cantha and Elona. It involves the Deldrimor Dwarves fighting against the Destroyers, and covers the first part of the Dwarf arc.

During the travel quest from Cantha, Elona or Tyria to the underground passages of those locations, the players encounter Ogden Stonehealer and Vekk, as well as a horde of Destroyers, and are forced to flee through an Asura gate into Boreal Station in the Far Shiverpeaks. Vekk demolishes the gate to prevent pursuit, and the players encounter Jora, who is unconcerned with them because she is on an important hunt.

Eventually, the players reach the Eye of the North and encounter the Ebon Vanguard, including Gwen.

Act II: Against the Destroyers[edit]

Northern Allies starts off having you help Jora regain her reputation as a warrior and ability to "become the bear" - you must aid her in killing her brother, who was transformed into a monstrous Savage Nornbear. By using the wolf's blessing you track him down and kill him. Then you must help her redeem herself by cleansing her ancestral family homestead from encroaching Charr. Players must also go and help Olaf Olafson cleanse the raven shrine - an important location to the Norn people.

You go with Vekk to seek out his people, the Asura, in order to help against the destroyers. You must rally some of the greatest Asuran minds in order to construct a Golem - a powerful magical creature that would be of great assistance in the war. Players find Oola, Gadd, and Renk to collaborate on the project. Players help defend the Golems as they are powered up, then take them to pillage a nearby Destroyer hive. For now, the Tarnished Coast will be out of peril.

Players go with Gwen to search for the missing Ebon Vanguard members, including their commander, Captain Langmar. You make a deal with a captive charr, Pyre Fierceshot, who will help you find the Vanguard if you help him rescue his warband from the Shaman caste, which is now in open war with various rebellious Charr warbands , including Pyres. You later siege Hierophant Burntsoul's stronghold, and rescue the Vanguard.

Act III: A Time for Heroes[edit]

It is discovered through the Scrying Pool that the destroyers come from an underground cavern near the Central Transfer Chamber, and are being led by the Great Destroyer. In order to battle the destroyers successfully, the dwarves will need to summon the power of the Great Dwarf, using an artifact from the Heart of the Shiverpeaks. Once alliances are made with the Asura, Norn, and Ebon Vanguard, the characters travel into the heart of the Shiverpeaks to recover the artifact, now guarded by Cyndr the Mountain Heart, who the characters must battle. After returning the artifact, Jalis performs a ritual which changes most of the dwarves into Stone Dwarves, using the power of the Great Dwarf.

With all the allies prepared for the battle, the characters journey into a system of caverns leading to the Central Transfer Chamber. They are assisted throughout by Asuran Golems, and at certain stages by the Stone Dwarves, Ebon Vanguard, and a group of five Norn. When the characters reach the Central Transfer Chamber, they kill all the destroyers guarding it, including the Disc of Chaos. 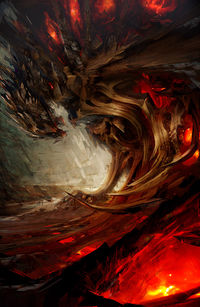 Killing the Great Destroyer had exactly the expected effect: the destroyers became confounded, and were beaten by the dwarves. Ogden also reveals that Livia found the Scepter of Orr, a new type of creature is appearing, and that the "statue" in the Great Destroyer's cavern is actually alive, and will wake up some time in the future.