Chasing a Legend is a story telling the story of Devona, Aidan, Mhenlo, and Cynn. 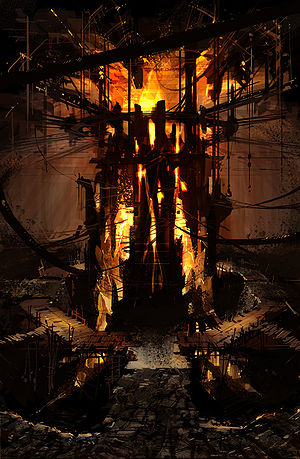 "You don't want to go out there, laddie."

Aidan looked up from his pack.

The Dwarf who had customized his new bow scratched his beard. "The last fella from Ascalon who went out there never returned."

"Who was that?" asked the Ranger.

"'Bout a year ago, a fella named Tasco—"

"Marshall Tasca?" interrupted Aidan. He knew well the tales of the intrepid explorer. A man said to be impossible to kill, Tasca was reputed to have survived avalanches, locust swarms, and the occasional wummpus stampede. "He went out there?"

"Like I said," repeated the Dwarf, "Couple of seasons ago I made some gear for him... An axe, some boots, and a sturdy pack. Then he asked me to put together a dog sled for him. I did as he asked, but he never returned."

"It is," replied the Dwarf. "Come to think of it, there was another fella out here askin' 'round about that Tasco fella."

Aidan jumped in. "There was someone asking about him?" he asked the Dwarf, holding up his hand to silence the Elementalist.

"Aye," said the Dwarf. "Another human." He gazed at Aidan, Mhenlo, and Devona. Then his eyes came to rest on Cynn. "Not quite as rough looking as you folks—"

Cynn took a step forward and raised her hands as if to cast a spell, but Mhenlo caught her by the wrist.

"—but sturdy enough," finished the Dwarf, smiling at Cynn's glare. "Think he called himself Whitman." 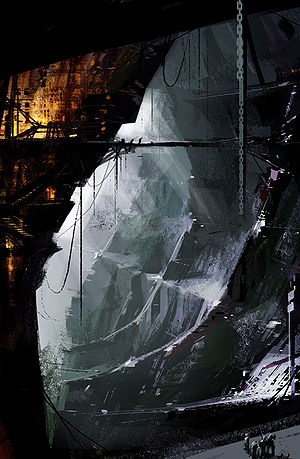 The name brought Aidan to his feet. Since the Searing there had been only two famous Ascalon marshals—together credited with mapping every last leaf of the Maguuma Jungle and accounting for every fissure of the Shiverpeak Mountains. Indeed, there were parts of the snowy mountains that bore their names—places where each was rumored to have either died or come as close as one can to passing into the Mists while still making it back to this life. But neither had been heard from for more than a decade.

Aidan felt a tingle of realization roll up his spine. If what this Dwarf craftsman said was true, both had been to Droknar's Forge within the last year.

"And what happened to the second man... to Whitman?" asked Aidan.

The Dwarf shrugged. "Guess he went after that Tasca fella." With this the Dwarf smiled wide at Cynn, revealing a mouth half-full of broken teeth. "Probably went out to Grenth's Footprint and down into Sorrow's Furnace."

That was all he needed to hear. Lifting his pack, Aidan slipped his new bow over his shoulder and handed the Dwarf a sack of gold.

"Thanks for the bow," he said. With a quick glance at the others, he turned and headed toward the gate. "If I find Marshall Tasca, I'll let him know you still have his dog sled."

Devona and Mhenlo turned and followed the Ranger out of Droknar's Forge.

Cynn was the last to leave.

The Dwarf craftsman locked eyes with the Elementalist for a long moment, then he tugged on his beard.

"You might be right, lass," he said finally. "Might be a little tight today. That's what I get for braiding it meself."

Cynn smiled. "Better get that looked at."

"Aye." The Dwarf nodded. "And you'd better look after those friends of yours," he said. "If you think my beard is tight, wait till you get a look at the Stone Summit. No huffier mongrel on this frozen peak than one of them."

"I'll do that," said Cynn, her smile tightening on her face. With that, she turned and followed the others out into the snow.