The Dwarves is a story telling the story of Devona, Aidan, Mhenlo, and Cynn.

Devona's breath rose in a steamy column above her head as she ran. "Are you sure about this? These dwarves don't seem too friendly."

Aidan looked over his shoulder at their pursuers, then back to the curved, iron-plated bridge before them. "No," he said finally, "but what choice do we have?"

"We can make for the bottom of the valley." Cynn pointed to a path to their right. "Avoid these snow-dwellers altogether." 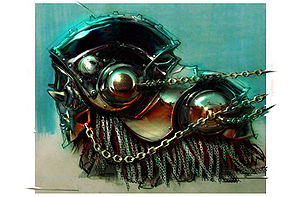 Aidan shook his head. "There are few places in the Shiverpeaks where we will escape their notice. Besides, the Deldrimor dwarves have no love for the Stone Summit. They will help us." The ranger swallowed hard. "I think."

The dwarven dwellings ahead of them were very different from the last they had encountered. Instead of stone slabs wrapped together by heavy iron chains, here the buildings had worked metal roofs and intricately carved wooden doors. These were homes for families, not barracks for soldiers.

A volley of arrows struck the ground around the running humans, and Cynn hissed a full breath through her clenched teeth.

The elementalist came to a full stop and turned around to face the dwarven archers. A line of blood ran down her shoulder where an arrow had impacted and torn through her flesh.

"I don't care if any of the dwarves in these mountains are our allies," she said, her eyes turning dark and the jeweled tip of her staff turning a fiery orange, "I'm through being chased." 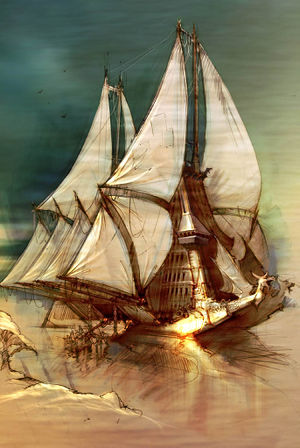 Holding both hands out in front of her chest, the elementalist spoke several words of power. Her body was instantly surrounded by a nimbus of glowing red runes, and her feet lifted off the ground. Suspended in the air by the flow of magical energy, Cynn's voice rose and rose, growing in intensity until Devona thought the sound would bring the glaciers down from the mountaintops.

Then just as suddenly as it started, the cacophony stopped, and the Shiverpeak Mountains fell silent. The sky erupted in a riot of oranges, reds, and yellows. Huge meteors of flame fell from the heavens, pelting the pursuing Stone Summit dwarves. Plumes of snow flew into the air, momentarily obscuring Devona's view of the chasing mob. Dwarves screamed as the flaming rain burned through their heavy furs, searing their skin. And the telltale hiss of fire meeting snow filled the valley.

Cynn's lip curled up into a smile. "Take that."

Devona spun around, drawing her sword at the sound of hooves clomping over the iron bridge. A pair of heavily armored and harnessed yaks came right toward the humans. Behind them, attached to the harnesses by four thick chains was what could only be described as a snow ship. The vessel had a thick wooden mainmast and three billowing sails, not unlike the ships Devona had seen off the Tarnished Coast. But where the sea-going vessels had a deep V-shaped hull, this one was flat on the bottom for traveling over the snow and ice.

"Well Aidan," said Devona, moving to stand back to back with the ranger, "I hope you're right about the Deldrimor clan." She tightened the leather strap holding her shield to her forearm. "Because this doesn't look like much of a welcoming committee."