The Crystal Overlook is an explorable area in the Desolation and takes its name from the nearby Crystal Desert, the destination for Elonian pilgrims seeking Ascension. Parts of the Great Pilgrimage are repeated through quests in the Desolation as well as both quests and missions in Guild Wars Prophecies.

You can only reach this area by crossing from one of the three adjoining explorable areas: the Alkali Pan, the Arid Sea, or The Ruptured Heart; it is not connected to any outpost or town. You can complete the Nightfall storyline without visiting this area, which is the site of a single secondary quest (Family Soul, which requires access to Prophecies) and one Zaishen Bounty.

Note: All services are found in the northern abandoned settlement. 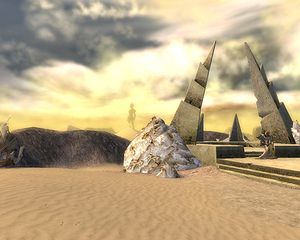 Statue in the distance.
Retrieved from "https://wiki.guildwars.com/index.php?title=Crystal_Overlook&oldid=2670584"
Categories:
Hidden categories: