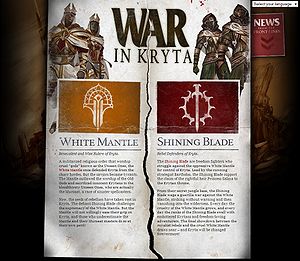 Screenshot of the War in Kryta page.

This section is a timeline of the updates given by ArenaNet over the duration of their campaign.

On March 13th flyers with QR Codes were handed out at two different conventions: at GDC 2010 by Regina Buenaobra and at the Emerald City Comicon by Martin Kerstein.[1] One of the flyers featured a member of the White Mantle with the slogan 'OBEY', the other featured a Shining Blade symbol and the slogan 'DISMANTLE'. The QR codes led to pages on the Guild Wars official website: white_mantle and shining_blade respectively. These pages shown a color version of the flyers which were handed out.

The source of these pages featured the date "March 16" but this is related to the date the content was created rather than a clue.[2] On March 22nd, the date was changed to "Go, Discover Contentment. Truth is obedience" on the White Mantle page, and "Mantle has discovered plans. Writing is on wall." on the Shining Blade page.

At the time this campaign was under-way ArenaNet was releasing slide shows of concept art which was shown at the Game Developers Conference. At the end of the third video three White Mantle propaganda images flashed up and in the fourth video three Shining Blade propaganda images were shown. At the time these videos were released the pages hosting the flyers were updated with wallpapers.

A few days after these changes, both the White Mantle and Shining Blade posters were replaced with a vandalized version.

On April 1st, the Shining Blade poster was restored. This version had a new QR code which read "Midnight clouds will part. The second symbol will reveal its Face like a hidden moon. /stnarytothtaed." /stnarytothtaed ('death to tyrants' spelled backwards) pointed to a page on the official website /stnarytothtaed which had an image with writing in Old Ascalonian. The word was translated to read "Blade".

On April 2nd, the Shining Blade facebook page was updated with yet another QR code. This time it read "Create one from two. Unity Resolve Liberty. /neeuqsiamlas." Again /neeuqsiamlas ('salma is queen' spelled backwards) lead to /neeuqsiamlas which had an image with writing in Old Ascalonian. The word translated to read "Camp." Capitalized letters of the second sentence spell out "URL."

Using the two words from the images a new URL was discovered: /bladecamp. The image on the bladecamp page was an in-game image which was identified to be in Talmark Wilderness in Kryta. It was noticed this image had a hint of red, so when it was edited using a red layer with saturation a hidden phrase was found: /warinkryta. This lead to /warinkryta that contained a very blurry image.

Shortly after the 'bladecamp' page was found a new Guild Wars build became available. It contained:

Over the next week the image on the 'warinkryta' page became progressively clearer. On the 8th of April it became fully clear with a page providing extra details about the two factions and beginning the War Chronicles. The flyers on the 'white_mantle' and 'shining blade' pages were replaced with versions with "Strike Now" scrawled across them. A new game build introduced White Mantle Peacekeepers in-game as a continuation of the conflict hinted by the viral campaign.

Two Facebook fan sites were created for the two sides of the conflict; The Shining Blade's Facebook and The White Mantle's Facebook. As with any Facebook site members of the community could become a fan of the factions. During the viral campaign and continuing after it completed both factions received status updates, some of which posted propaganda art from the community. The Facebook updates are transcribed below. 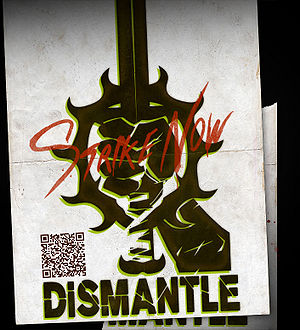 When the phrase "Enemy monitoring / maintain silence >4.5 / DisAvow the Knowledge of Unseen Tyrants, and Understand" appeared, users asked a community manager whether commenting would have any eventual consequence, and were encouraged to try and wait and see.[5] The capital letters in the last phrase spells out "Dakutu" - the village where the Shining Blade camp is located. 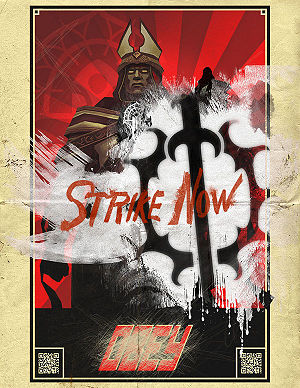 Images released in the viral campaign: