The Goddess of Truth

This article is about the statue. For the god, see Goddess of Truth.

Spoiler alert: The following text contains spoilers relating to the story of Nightfall. 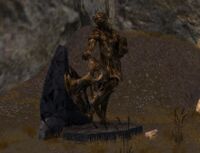 Statue of Kormir in Chantry of Secrets.

The Goddess of Truth is a statue of Kormir erected by the Order of Whispers after she ascended to become the Goddess of Truth. Kneeling at that statue summons the Seer of Truth, the goddess' avatar, which in turn grants access to the Domain of Anguish. The statue stands in the blocked area of the Chantry of Secrets which is only accessible after completion of Abaddon's Gate mission.

Unlike all other god states, the appearance of this statue is independent of whether or not the world is currently blessed with the favor of the gods. The statue itself depicts a blindfolded Kormir holding a book close to her chest, while holding and standing on the mask of Abaddon with her other hand.

When using the "The Goddess of Truth" interactive object that is next to the Statue of Kormir found in the Chantry of Secrets outpost: