As one of the most promising students of the Shing Jea Monastery, Master Togo has decided you've earned an introduction to Minister Cho, minister of Cultural Affairs, who resides in his estate on Shing Jea Island. Together with a fellow student, Yijo Tahn, Master Togo leds you through Sunqua Vale to the entrance of the minister's estate. On arriving at the gates, your group discovers that the minister's guards have become highly aggressive due to a strange disease that has spread on the estate. Fearing for the safety of the Minister, Master Togo leads your group to rescue him. 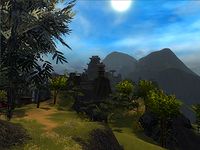 This mission is given in a tutorial style with frequent stops and locked doors where Master Togo explains to the players the fundamentals of combat including calling and attacking of a single target, sticking together as a group, using the mini map, and avoiding battling a large group of enemies by waiting for a patrol to separate from the main group.

In the initial part of the mission, there is only a single path through which players can travel under each newly opened door onto the next tutorial. Once players kill the first boss (warrior), the Afflicted Horror, the tutorial is essentially over and the path becomes more liberal. Players can follow Master Togo from this stage to avoid confusion. Players with low level characters should take care through these areas and try not to aggravate more groups of animals than necessary as well as watch for area of effect spells from the Sickened Scribes. The final fight can be tough for low level characters. Mind in particular the Afflicted Soul Explosion which occurs when the boss dies.

Bug.Master Togo can sometimes get obstructed by a chest spawn. If this happens before the menagerie area, the only way to continue is to restart the mission and try again.

Hard mode should present little trouble for a balanced party: the Sickened Servants near the end have some area of effect spells, some warriors have knock downs, and a number of foes have Primal Rage or/and Frenzy. There are no hexes and the only condition is burning from Sickened Servant's Star Burst and Sickened Scribe's Spirit Burn.

Guardsman Zui: "Ah, Master Togo. I did not know you were here. The minster has been waiting for you. Please, you are welcome here."

Canthan Soldier: "It is madness. Guards have turned on each other. Something has gone terribly wrong."

"It is madness I tell you, madness."

"You must stay here."
"Do not let anyone else in or out of this gate until we know what is going on."

"Whatever it is that threatens this estate must not be allowed to threaten the entire monastery."

Master Togo: "I will look for him."

Master Togo: "Yijo! <party leader>! Come with me! Minister Cho is in grave danger. We must find him before it is too late."

"Come, <party leader>! The Master wishes us to fight by his side! We will die with great honor."

{When reaching the first group of enemies.}

Master Togo: "Sickened guards! We will have to destroy them. Let us focus our attacks on one foe at a time so that we can defeat them more quickly."

Yijo Tahn: "Master, isn't it true that we can call out our target by holding CTRL when we begin attacking?"

Master Togo: "Quite so. <party leader>, you should be the one to call a target. The rest of us will attack your target. Hurry now, <party leader>. Hold CTRL and double-click one of the Sickened Guards!"

(After the group is defeated.)

Yijo Tahn: "Yes, Master. We must keep our eyes open and stay with the group."

(When reaching the closed gate past the first groups of enemies.)

Master Togo: "Now, students, we will regroup at that tree, there. Do you see how I have indicated the location on your mini-map? To do this, simply left-click the mini-map."

"You can also give more advanced instructions by holding down the left mouse button and drawing on the mini-map."

Yijo Tahn: "I see! If I click once, a marker appears temporarily. If I click and hold, I can draw on the map. How very useful!"

Minister's Guard: "There is something evil at work here...."

Master Togo: "Did you see that boy up there? Perhaps it is Guardsman Zui's lost son?"

"Child, please stop! We wish you no harm!"

(When engaging the next group.)

Master Togo: "We must stay together. We are much more effective as a group."

"Remember, our strength comes in numbers. A lone hero is often a dead hero."

Yijo Tahn: "Yes, Master. There is safety in our numbers."

(When reaching the bridge.)

"Help me...please!!! Something is wrong with the other guards; they have gone mad!"

(After Tahnjo's group is defeated.)

Minister's Guard: "I cannot thank you enough for your help. Those guards...they were not the people I once knew. Something changed them. Be careful, there are more of them about!"

(When reaching the closed gate past the bridge.)

Yijo Tahn: "See, there: a large group of enemies waits just ahead. This battle will be glorious!"

Master Togo: "Yijo, stop! With such a large group [sic] is best to keep your distance and see if they will separate, giving you a better opportunity to strike."

"Wait here, students, and I will lure them back to you. If you are patient, the battle will be much easier for us."

(After the lured group is defeated.)

Master Togo: "Keep up, students. It is imperative that we find Minister Cho quickly and learn what has been happening here."

(When reaching the closed gate before the Afflicted Horror.)

Yijo Tahn: "That creature is no normal foe. I can see a glowing aura of power around it!"

Master Togo: "When you defeat such an opponent, its death will provide you with a morale boost. This will recharge all of your skills and temporarily increase your Health and Energy."

Yijo Tahn: "This will even allow us to recharge our Resurrection Signets! We should not hesitate to use them in a battle with such an enemy for if it is defeated, the signet will recharge afterward!"

(After leaving the room with the Afflicted Horror.)

Minister's Guard: "I tried to approach the estate, but the other guards...my own friends...they attacked me! I do not understand what is happening!"

(When entering the menagerie.)

Yijo Tahn: "What is that? Some sort of feathered demon?!"

Master Togo: "I believe it is a moa bird, Yijo. It is from a land far across the Great Sea."

"The minister is fond of collecting exotic animals. It seems some of them have gotten loose. This one looks to be quite ill, does it not?"

Yijo Tahn: "It looks quite dangerous to me, Master!"

(After leaving the menagerie.)

Master Togo: "There is that child again. It can only be Guardsman Zui's son."

"Your father, Guardsman Zui, sent us to find you, child! Come back!"
"The Minister's estate is up ahead. We must hurry! I fear this...situation...is far worse than I expected."

"May the envoys carry you swiftly on to the gates of everlasting paradise."
"Rest easy in the Mists, my old friend."

Lost Boy: "You are Master Togo."

Master Togo:"Ah, I can see you are a very smart little boy. But tell me, what brings you tears."

Master Togo: "A bad dream? Tell me what sort of dream could cause such tears."

Lost Boy: "The wind blew the leaves from the trees, and the animals in the zoo all became scared."

"The animals. They were...they were always very tame, but something in my dream made them angry."
"And they started hurting everyone."
"Then the people got angry too, and they started to hurt each other."
"Minister Cho...he was the most angry of all, and...and he turned into a big angry monster."

Master Togo: "Where are your parents, little one?"

Lost Boy: "My mother died when I was very little. I do not remember her much."

Master Togo: "And your father?"

Lost Boy: "He is guarding the gate."

"Master Togo, you do not think he will be angry like Minister Cho, do you?"

Master Togo: "No, little one. I do not think he will be angry at all."

"In fact, I think he will be very happy when he sees you."

"I will see that our little friend here makes it back to his father."
"Go find Ang the Ephemeral and tell him what we have found here."
"He will be most interested."

Anomaly. Although Minister Cho turns into the Diseased Minister at the end of the mission, he leaves behind a human corpse when he dies.

Bug.It is possible for the Sickened Guards to kill the infected Minister Cho before you have a chance to. Thus, the mission will become impossible to complete and players will have to resign and retry.
Retrieved from "https://wiki.guildwars.com/index.php?title=Minister_Cho%27s_Estate&oldid=2678866"
Categories:
Hidden categories: