Born in: Unknown
Nation: Ascalon
Profession: Necromancer
Age: 20
Eve hasn't a clue where she was born—she was found as a young child stealing food from a sleeping vagrant in the back alleys of Ascalon City. Fortunately for Eve, she was not found by a city guard but by a kindly matron, who brought her to the Holy Dwayna Academy for Wayward & Incorrigible Girls (Ascalon City branch). Wherever Eve had come from, she had already learned to read at an advanced level before she ended up at the school students called the "Wayward Academy," and voraciously devoured every text in the library. It wasn't long before Eve's curiosity (and her ability to both manipulate and avoid Matron Irma) led her to a secret library in the bowels of the Academy. There, forbidden texts opened up an entirely new world to young Eve. By the time she was 15, she had raised her first bone minion.

Eve had never gotten along with the other girls—she much preferred the company of her tomes and scrolls. When, one day, a few of her fellow students pulled an especially vicious and humiliating prank on her, Eve literally pounced upon the leader of her tormentors, bit the girl’s ear off, and swallowed it whole. That was the end of Eve’s studies at the Holy Dwayna Academy for Wayward & Incorrigible Girls, and not even Matron Irma mourned her departure.

Eve met Mhenlo, Cynn, Devona, and Aidan during the Charr invasion. She was in the graveyard, experimenting with new methods of undead resurrection, when the Charr flooded into the cemetery on the heels of Mhenlo and the others. More out of curiosity than any noble intentions, Eve ordered the Charr to stop. When the beastly creatures turned on her instead, thinking her easy prey, she simply raised her hands and called forth a small army of the dead to meet them. The Charr never stood a chance. Eve was amused when Devona asked the Necromancer to join them, but has since become a good friend of Devona, Aidan, and Mhenlo. She is often in conflict with Cynn, but the two respect each other’s power enough to get along when the going gets rough.

Of all Mhenlo's friends, Eve is probably the most independent, and it would not take much for the Necromancer to leave them behind and strike out on her own. But she is smart enough to know that loyal allies—even the living—are valuable to one with her powers. She has joined the expedition to Cantha to learn new ways to manipulate the powers of necromancy, and, she freely admits, to see what kinds of horrors might be created from Cantha's unique species. Eve's one constant companion is a human skull she found in the hidden library. She insists that the skull—which she calls "Adam"—speaks to her and dispenses wise advice at critical junctures. No one else has ever heard the skull say a word.

Eve (born either 1051 or 1052 AE) is an Ascalonian orphan has been traveling with Devona, Mhenlo, Cynn, and Aidan since sometime after the Searing. Though she is first seen with them in the Southern Shiverpeaks, Eve accompanied the group on their travels across Tyria since Ascalon. She is blunt in her points at times and enjoys talk of darker things, or simply talking of Cynn's anger.

She aided Devona, Mhenlo, and the others in their adventures across Tyria, Cantha, and Elona, helping against the Lich Lord, Shiro Tagachi, Abaddon, and the Great Destroyer. She was not seen again, like the rest of the group, until Gwen and Keiran Thackeray's wedding. 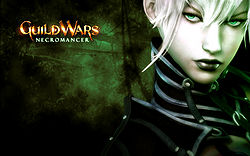 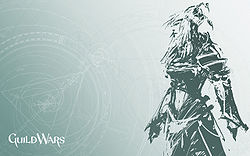