Born in: Wajjun Bazaar
Nation: Cantha
Profession: Assassin
Age: 22
Nika's past is shrouded in nearly as much mystery as Nika herself, though Master Togo has learned a bit about her—everyone knows the master of Shing Jea Monastery. She has also let slip to Master Togo, if not to Mhenlo and his friends, that she was born in Wajjun Bazaar, a market district not far from one of the largest ports in Cantha. Her father died mysteriously before she was born; her mother sent Nika to the secretive Conclave at a very young age to learn the art of the Assassin, a trade that the women of her family had practiced for centuries. Her mother, in fact, runs the largest Assassin's guild in all of Cantha. Nika killed her first man at age 10, and made her first solo kill when she was 12. She has never murdered anyone, to her way of thinking—assassination is her business, and she kills only to defend herself or her friends, or to fulfill a licensed contract.

Nika joins Mhenlo's group almost by accident. She is impressed by the way the disparate group of heroes works so efficiently, and offers to fill a void left by a set of twin sisters that left the group earlier. She is wholly dedicated to only two things—avenging her ancestor Vizu and protecting the Empire of the Dragon.

Nika (born either 1049 or 1050 AE) is a proficient Assassin that was schooled at Shing Jea Monastery and was a classmate of Mhenlo's. She is now a member of the Obsidian Flame. Mai is her cousin. 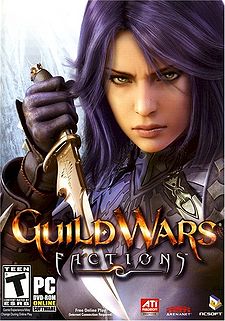 Nika as depicted on the Guild Wars Factions box art.

Eye of the North, in the Norn Fighting Tournament

"Hello, stranger. A bit of free advice? Watch your back on these streets. You never know who might be looking to stick a knife in it. Kaineng City embraces those who know it well like a mother embracing a child...but new arrivals aren't always so lucky."

Shenzun Tunnels (during the quest To Tahnnakai Temple):

"I believe we can help one another if we work together"

"We have much to lose if this plague is allowed to spread across the city. This place has been my life and I shall never abandon it, on my honor. Since I was first given my daggers, I have protected this city by removing those who dishonor her.

What did you need?"

"I have never been outside of Kaineng City. Did you see that giant tree with all the windows? You should really look up often, otherwise you might miss something.

Did you want to talk about anything?"

"Kaineng City has always been home to me. What kind of person would I be if turned tail and ran away when I was needed most?"

Accept
"Why do we wait? My daggers are eager for action."

"We have saved my beloved Cantha, and for that, (character name), I cannot thank you enough. It was also good to see something of the world outside of the city. It has only served to strengthen my resolve to protect the place that I love."

Kaineng City
"Five on one should be about fair against me, if the five are truly skilled."
"One does not wait for trouble to find them in this city, for it always will."
"We should leave. Standing here is not wise."

Arborstone
"This place is awesome."

"Are my daggers too fast for you?"
"Aww, you're bleeding. Who could have done that to you?"
"Blink and you'll miss me."
"Can't we get some real competition?"
"Careful now."
"Die with honor and you will be given a place of honor in the afterlife."
"I'm enjoying this immensely."
"Your end is at hand and you don't even seem to realize it."

Bug.During the Norn Fighting Tournament, Nika cannot activate Horns of the Ox or Shattering Assault, because she lacks an offhand attack. (Her original offhand, Black Lotus Strike, was turned into a lead attack.)