Wintersday 2008 is different from the other Wintersday events. It will feature new things, and for the first time in Guild Wars, it will also be celebrated in the Eye of the North!

Wintersday 2008 Opens Up the Eye of the North[edit]

The Wintersday Finale is similar to Nine Rings at the Shing Jea Boardwalk but with Candy Cane Shards instead of Festival Tickets. Playing this game counts towards your Lucky and Unlucky title tracks. The center circle gives the most lucky points, whilst the outer circles contribute most to your unlucky title.

At the end of the finale, presents will be put in your inventory, taking up approximately 15 minutes, so be sure to stay logged on that character if you want to receive the presents.

On the final days, the rival gods Grenth and Dwayna called upon the people of the town for their support. The God with the most followers, rewarded the people of the town with a festival hat. Followers of Grenth stood upon the red rings, and the followers of Dwayna upon the green or blue rings. Unlike in previous events, characters will not receive duplicates of hats they already have. 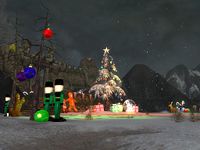 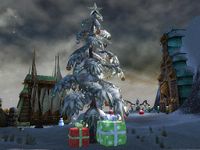 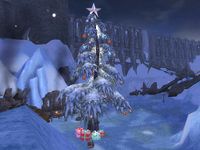 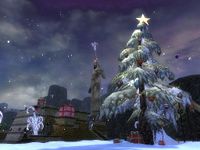 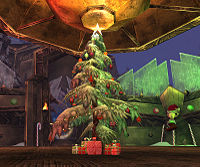 Wintersday in Eye of the North

Quests from the Rift Warden

(Accessed at both Lions Arch and Kamadan)

In addition to the seasonally appropriate headwear that you can receive from Dwayna or Grenth at the end of the grand finale, you can also obtain these Wintersday Items during the 2008 festivities: