Frigid Hearts are cores of stone and coal within the chests of the Ice Imps that populate the Shiverpeak Mountains. Even after the Imp is slain, the heart can remain cold for weeks, regardless of how warm the environment. 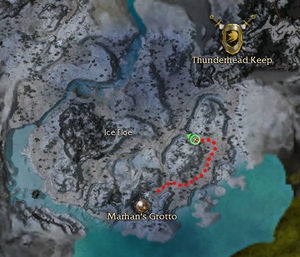 Ice Imps are notable for their use of Water Magic, specifically Maelstrom and Mind Freeze. Consider spreading out your party to avoid being consistently interrupted. General anti-caster, hex removal, and/or spell targeting prevention skills are effective against them. 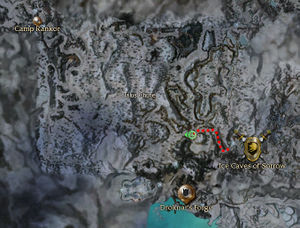 Start from Marhan's Grotto and follow the eastern path along the coast and you will find exclusively Ice Imps up until the end of the route indicated in the wiki map. Commonly, groups will consist of three to four Ice Imps, with one particularly sizable group that can be found about halfway through. On average, a full run of the route indicated will net you 4-12 Frigid Hearts.

Start from Ice Caves of Sorrow and follow the path down the mountain, turning left as you cross the bridge. The groups of Ice Imps here are greater in size, and may be difficult to farm on your own. Following this route, you can expect to receive 2-6 Frigid Hearts on average.